We’re doing year two of the Social Work Portfolio in Google Docs. I am opting to do the creation/duplication of the main files on the computer end rather than the Google Drive/Scripts side of things because of all the hassle from last year. You can read more about the full failure here.

This AppleScript will give me 100 iteratively-named (x_1, x_2, etc.) copies of the source folder and all its sub-directories and their content. It is just adding a variable from the AppleScript to the loop that calls the terminal command ditto.

I’m sure a shell script could do this or I could do it fully in Automator. There are many paths but I knew enough about both of these to get what I needed one in ~5 minutes.

Next up will be automating the sharing via Google Script. It won’t be much different than last year but I’m going to add a piece that will write that the folder and the contents were successfully shared to the spreadsheet that holds the student emails. That way when/if the script fails it can auto-resume without having to go back and start over.

We wanted to be able to know whether people signing up for Ram Pages were faculty or not but didn’t want to add fields for them to fill out. VCU has an online phonebook with faculty emails in it but there didn’t appear to be a way to hook into an API. But you can provision the site with search items via the URL like so https://phonebook.vcu.edu/?Qname=woodwardtw%40vcu.edu. Since I knew that PHP can grab a website (file_get_contents) and parse out the text in various ways (preg_match) it seemed like we could automate this. When the phonebook site fails to find a matching email it returns some text that says ‘No matches.’ That’s what I decided to look for. If you look at the comments below, each line of the code is broken down and pretty much (over) explains what it does. Update Here’s a better version using curl and displaying the data in the user profile so you can see if you’re crazy or not. It also checks for the metadata field and updates or creates it as needed.

Another quick and easy option if you end up sending similar patterns of responses via email. We also use a more aggressive option that uses form submissions etc. but this one doesn’t require anything more than GMail account. 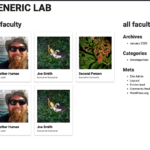 My date titles continue to get blurrier. The range of stuff covered gets wider. VCU is moving any course with over 50 students to the online format. We’re supporting that move in a variety of ways. Our little R&D group is trying to answer the non-standard problems, questions, media desires. To some degree we are trying to create those desires. Chemistry/Pharmacy Like my brief foray into protein molecules, I found there are lots of chemistry options out there. My first round was with Kekule.jsI also found out Kekule was a German chemist. Initially I thought it was a weird joke related to molecule. and I have a little CodePen demo of the editor here. My next attempt was with Chemdoodle. I’ve got a functioning editor and interactive molecule up on CodePen. These clearly aren’t feats of programming on my end. I’m just exploring the libraries and trying to get a feel for how hard/easy it is to use them. I also figure putting them up in CodePen might help other amature people get something working more quickly than some of the documentation allows. Now that I have a bit of background understanding I’ll be able to provide examples and make suggestions if the faculty need arises.That sounds kind of like a horror movie line — The faculty need arises. That […]