??? on Twitter: “at no point in this video did i know what was coming next https://t.co/XXaIlfc4bk” / Twitter Brian Lamb on Twitter: “On behalf of the #StopGlobalWarmingConference Committee, I want to respond to comments about this year’s keynote panel that features oil companies. They are also sponsors of the conference — thanks guys, we wouldn’t be here trying D3 annotationssome nice examples via @cogdog John Lanchester reviews ‘The Great Firewall of China’ by James Griffiths and ‘We Have Been Harmonised’ by Kai Strittmatter · LRB 10 October 2019. Facebook has changed its terms of service over ‘tagging’ people’s photos a couple of times, from opt-out to opt-in, but the gist is that it is too late: Facebook already owns your ‘faceprint’, the algorithmic representation of your face. How much do we think we can trust them with it? Put it like this: Facebook owns a patent on how to recognise patterns of friendship association through identifying the spots of dust on your phone camera – in other words, if two people had their photo taken by the same camera, then those two people probably know each other. r03ert0/microdraw: Collaborative vectorial annotation tool for ultra high resolution data.Collaborative vectorial annotation tool for ultra high resolution data.

War and Peace – Our World in DataIt would be wrong to believe that the past was peaceful. One reason why some people might have this impression is that many of the past conflicts feature less prominently in our memories, they are simply forgotten. An overview of all the conflicts for which we have an estimate of the number of fatalities is shown in the visualization below. palewire/nrol-39-logo: A vector PDF of the official mission logo of NROL-39 Oregon Zoo on Twitter: “Ball python https://t.co/Z4yD4f0avG” / Twitter How can we develop transformative tools for thought?In fact, there are many ways of redesigning the essay medium to do that. Before showing you our prototype, please pause for a moment and consider the following questions: how could you build a medium to better support a person’s memory of what they read? What interactions could easily and enjoyably help people consolidate memories? And, more broadly: is it possible to 2x what people remember? 10x? And would that make any long-term difference to their effectiveness?

Documenting the NowDocumenting the Now responds to the public’s use of social media for chronicling historically significant events as well as demand from scholars, students, and archivists, among others, seeking a user-friendly means of collecting and preserving this type of digital content. Documenting the Now has a strong commitment to prioritizing ethical practices when working with social media content, especially in terms of collection and long-term preservation. Josh Hader’s Fastball Is Baseball’s Most Mysterious Pitch | FiveThirtyEightHader also owns a below-average total spin rate, as calculated by Statcast’s TrackMan Doppler radar component. The average spin rate for a four-seam fastball this year is 2,284 revolutions per minute, while Hader’s is a rate of 2,154 rpms. Moreover, fastballs — even mid-90 mph iterations — are generally pitches that produce some of the lowest swing-and-miss rates in baseball. *****I think about this level of analysis and numbers every time someone says something about AI or big data. A simple game. Intensely scrutinized. Simple rules. Observed from all angles. Recorded. Tons of money. Yet . . . The Day I Thought I Misled the President of the United States: A Visualization Tragicomedy“If anything on this graphic causes confusion, ignore the entire product.” That’s perfect. So perfect, in fact, that one of my followers on Twitter, Chen Mingi, suggested I should use it as […] 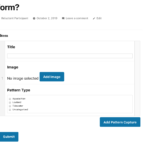 Origin Story We have someone who wants to allow people to enter various numbers of items in a particular pattern. We want to keep this as easy as possible and they wanted to avoid having to repeatedly hit submit. First Pass – Gravity Forms Repeater Field I initially thought we could do this in Gravity Forms using the beta repeater field option. I used example #2 this time. It lets you reference another form as a repeater field inside the parent field. This example uses the form with ID 1 as the parent and ID 2 as the included repeater. This worked great except it has issues with file uploads which canceled it out for our uses. This will work nicely for repeaters that aren’t dealing with those field types. And this pattern can be tossed in a plugin without modification with the idea that the first form you make will be the holder and the second form will be the repeater. Second Pass – ACF with Advanced Forms After seeing that fail, I debated writing something to customize the file upload in Gravity Forms but figured I’d try ACF first. ACF has repeater fields and I recalled using acf_form() in a project a while back but wasn’t sure how it’d handle repeaters. Prior to doing it from scratch, I […]

My click bait titles are so powerful! This isn’t anything special but it does show a couple of Google Script patterns that we reuse all the time. Folders are made in other folders! Documents are made in those folders. Things are shared. Ownership is assigned! So many things. The following script takes a form submission and then . . . makes a folder in a particular folder, shares it with particular people, sets the ownership makes a document within that sub-folder, shares it with particular people, sets the ownership adds them as a viewer on a different folder deals with some issues VCU has with students having both @vcu.edu and @mymail.vcu.edu email addresses but without them behaving as if they are the same in Google Details are in the comments. The trigger is on form submission.

Duplicating Posts from One Site to Another in Multisite

Origin Story We had two sites on a multisite installation. The desire was for site A (or any number of sites) to have posts in a certain category duplicated to site B. In many scenarios we’d just use Feed WordPress but in this case both sites were private. There may be a way to get that working in FeedWordPress but I am not aware of it. These two functions will copy content from one site to another when it is published. It won’t sync up editing or anything like that but it’s a decent start for doing that if it was desired. The explanation is mainly in the code comments. I’m not sure if that’s useful but I also realize that the audience for what I write1 is mostly me and I’m ok with it. Now you could change add_action( ‘publish_post’, ‘copy_post_replicator’, 10, 2 ); to add_action( ‘update_post’, ‘copy_post_replicator’, 10, 2 ); and it’ll run on any post update. The problem there is that edits to the posts will result in duplicates on the destination site. If we wanted to get fancy, we could record the post ID of the duplicate post as a custom field on the original and do some updating function based on that but this was a very fast response rather than a full blown project. […]