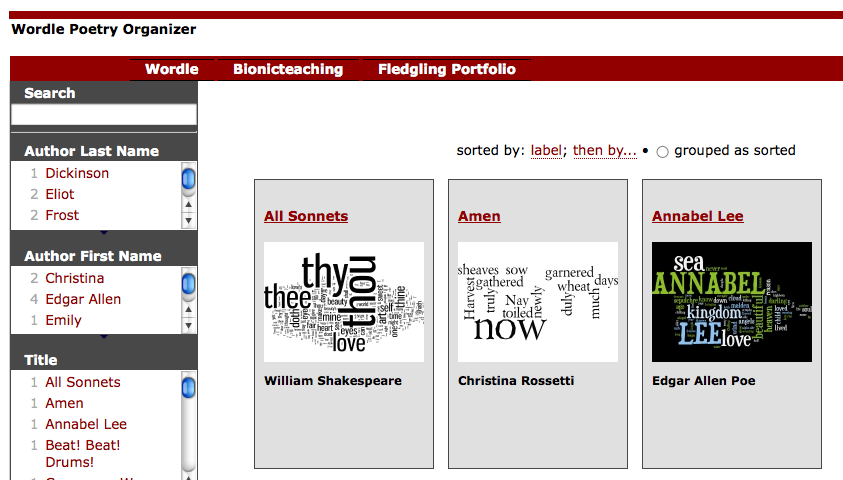 Well, you know how I love Exhibit and I’m also a poetry fan. So after messing around with it some the other day and seeing some interest from a few people who put in their own poems- I decided to see what other poems might be on there and see if I couldn’t display them in an interesting way.

Go mess with it.

Add your own wordle poem if you’d like (the css in the embed code will likely mess things up temporarily but I’ll fix it).

Now, if I had a class1 I’d get a bunch of these done for a number of poems from the same author and probably the same genre. Then you could sort them by author or genre and do a surface analysis. Do the big words matter? Are the “big words” shared between poems, across authors? Does it matter?

Where things could get interesting is creating fake Wordles that do represent the words you think matter most2. Students would falsely elevate the number of words to make them larger regardless of occurrence. Then the explanation of why becomes an interesting conversation- especially when comparing the two.

2 Oddly, most of my favorite lessons involve faking data, rap, animal attacks or, hopefully, all three 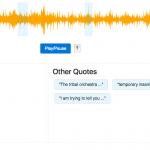 See the Pen wave surfer – waveform by Tom (@twwoodward) on CodePen. I needed to make a quick proof of concept for the annotation of audio on the web. In this case, it’s meant to provide a visual and auditory way to play through interview segments that represent different categories of responses. I found WaveSurfer.js this morning and just a bit later I had a functional example. I find the ability to highlight track elements visually and access specific segments to be a pretty powerful combination. If we stacked several tracks vertically the visuals would quickly point out content variation in terms of timing and total composition. You could get more and more complex from there. Playing with it gave me all sorts of ideas (including possibly using it as part of of the upcoming Reclaim Your Dance Party // API + Audio = (beats, visuals, internet, participate) session at Domains 17 with Grant and Brian). It’s also looking like I’ll be able to work more with our music department to think through online course on music so possibilities like this will be very useful. This kind of thing would be pretty easy to turn into a plugin . . .