Home > Examples > Annotating a Will: A Digital Process 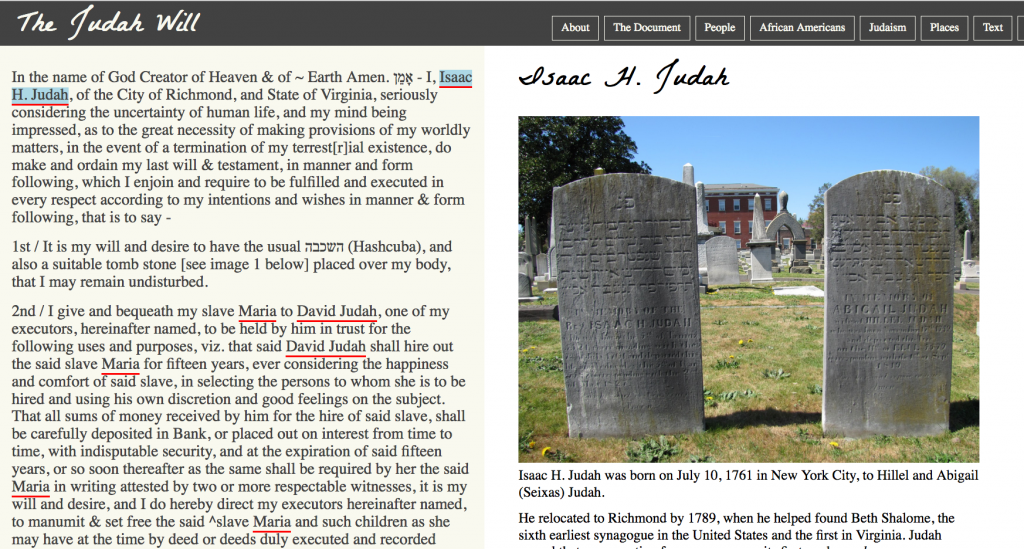 One of the projects that Ryan Smith chose as part of our Digital History course was the collaborative transcription and annotation of a historic Richmond will . . . describing it thusly1 in the syllabus.

Collaborative annotation:
To further put our emphasis on collaboration into practice, we will annotate [explain, contextualize, add to] together one document, the last will and testament of Isaac Judah, an early Richmond resident. This assignment will require student research, online or in person, to help explain and contextualize this document for a public audience. What software platform should we use to markup the item? How should we handle the will’s transcription? Who are the parties mentioned in the will? Where are the locations? What historical lessons can it teach readers?

The quality and quantity of each students’ research/commentary will count as 10% of the final course grade. The will can be found on our course website, in the Google Drive folder. The transcription file is: https://docs.google.com/document/d/1ghG-oyFvyza-zRUE4ZJf0_HF4_D5dey4Bv4BmM5JYFQ/edit. Annotations can begin as soon as the course begins and should be finalized by February 23 March 30. If the annotation is fruitful, we may post this result for public consumption. 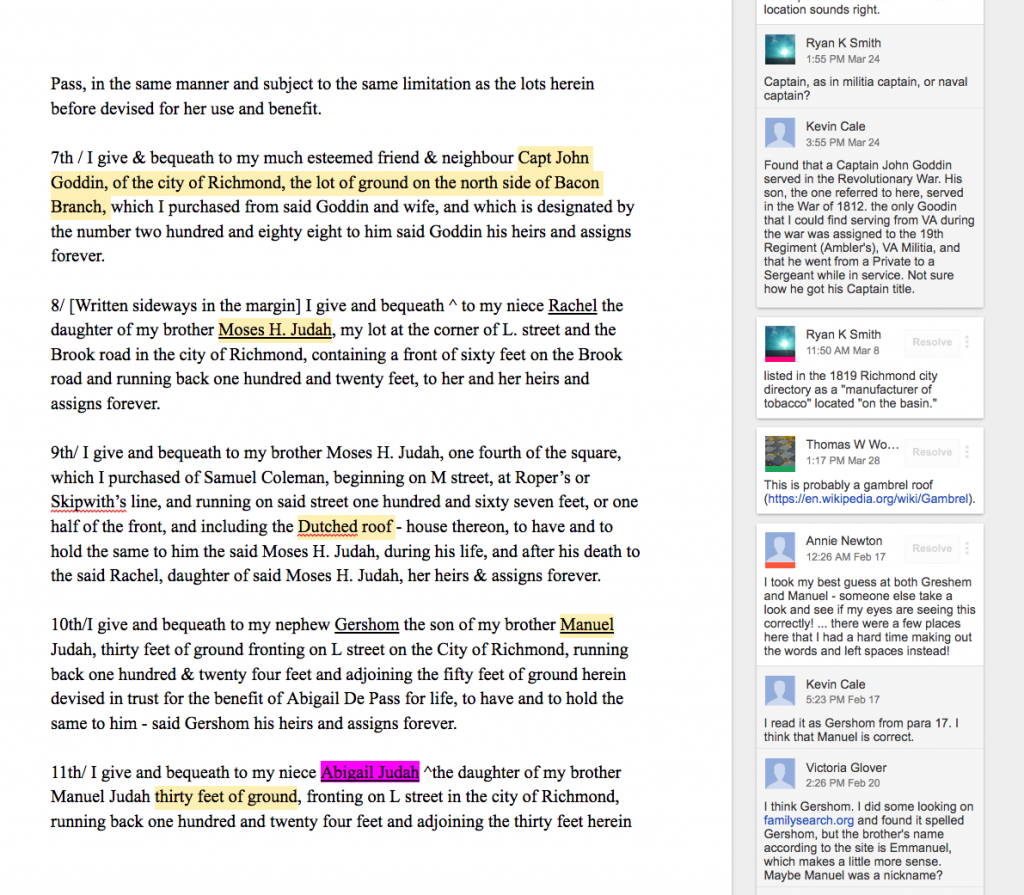 We ended up with quite a bit of work . . . in fact so much work that displaying it via the Google Doc didn’t really work. It remains an interesting way to look at the conversation and investigate expressions of thinking-like-a-historian. We also have interesting data to parse out via Draftback, comments, and the revision history. You can see one of the sectional playback options from Draftback below. So lots of fodder for a next-step product but clearly a pressing need for something else. It’s interesting to end up with such a clear and obvious decision that Google Docs wasn’t going to cut it.

I had recommended Google Docs as the path for this project for a couple of reasons (ease of use for one) but also thought it might be ok for the end product. It did well as a place for pointing and things and having a certain level of conversation. It also served very well in the transcription process. It began to struggle as people pointed to other resources via URLs and started to expand the images involved. These things started feeling uglier and messier. There are also some ideas around what to select when commenting and the use of highlighting that might be conveyed a bit more prior to annotation.

The excerpt above isn’t the most powerful example of this possibility but it does hint at some really interesting options.

My goal was now to figure a way to keep the will as a central element in the exploration and organization of the additional information. Often the original text ends up lost and I wanted it to remain central to anything we built. I wanted the annotations to be contextually displayed to deal with the scale.

Long term, I was thinking of ways to make this more approachable as a tool for annotating other documents. I also wanted to do the display mainly with javascript and leave the editing of larger details to WordPress and use the REST API for access. I think there are some paths. I’ll be thinking about it more.

I’m pretty happy with where we’ve ended up for a quick prototype. It’s been a partial attention project for about a week and something I’ve never quite done before. Ryan did some really fast and substantial work on consolidating and writing up all the research.

This is an example of clicking on ‘Maria’ which loads the WordPress page on Maria via JSON and highlights all instances of Maria in the document. It also underlines all the other names in the document.

I did some stuff modifying some Codepen CSS for family trees but it ends up being a bit of a mess because of the width needed to display so many kids. It’s just not something that’ll do well in mobile scenarios. Ryan did the actual work in draw.io and it’s pretty impressive.

I marked up people’s names2 using data-* attribute like so . . .

This is something I saw in a #30 Day Javascript Challenge demo a few months ago. I thought it was neat and figured I’d use it someday. I’ve also got the locations annotated in a similar way for later on if/when we do a bit more with mapping and places.

The rest is just javascript adding or removing stuff. You can see my attempts on codepen. I believe it’s all vanilla js except for the JSON fetcher . . . which I had already made for something else.

Initially the js clicking didn’t work in iOS. I couldn’t figure out why as it worked in Safari with the emulator. I turns out it was a CSS piece. I needed to make the cursor become a pointer like so . . .

Anyway, that was weird and good ol’ Stackoverflow saved me hours of suffering.

Another odd but I came across was an error in Safari “can’t create duplicate variable that shadows a global property” and it broke all the javascript dependent elements . . . which is pretty much the whole site. It’s an easy fix, just rename things so the variables don’t match but it’s a weird issue.

2 Initially, I was lazy and marked the words with just first names. I knew that I would regret not doing the full name. I did regret it.

Life is like a box of chaos and Forrest Gump was/is a descendent of Nathan Bedford Forrest and I’ve never read the Forrest Gump book. It’s always been difficult for me to keep track of what I did. I’m good about managing what’s in progress but once it’s done it fades from memory fairly quickly. It’s been worse lately as there’s just a lot going on. That is the purpose of writing these posts and really the main purpose of this blog over the years. I tend to look back at a few places to jog my memory when I write these- my calendar, github commits, codepen, and the YouTube videos I’ve made. Not perfect but it gets me started. It’s always amazing how much I forget until prompted. If anyone has better paths, I’d be interested in hearing about them. WordPress-y Things Lots going on with WordPress. I think I’m making some marked improvement on my overall design skills lately. I’ll credit Matt Roberts for inspiring me to up my game on that end. I’ve always cared what things look like but I think I’m better able to pull the whole thing together in a way that feels more unified now. Motivation in Context This is a lab site that has some custom post types and a nice relationship […] 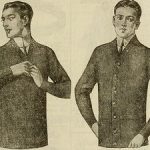 flickr photo shared by Internet Archive Book Images with no copyright restriction (Flickr Commons) I’ve been doing a whole lot of WordPress customization lately for really widely varying purposes/people. It has been a lot of fun and it’s an option that I’m not sure has been conveyed well to our faculty. Many times, faculty are looking for a process for students (or one another) that is semi-structured. The students have options but they need help remembering to do certain things (include at least one image, consider these three topics, add a link, etc.) or they need a bit of guidance to help create uniformity of some sort. If you’ve ever asked more than ten people to answer three questions in an email then you know that virtually all the humans fail to follow directions when given the chance.Inevitably, you’ll get anywhere from 1 to 12 questions answered and you’ll be presented with 17 additional questions, 9 complaints, and a link to something off-topic. 60% of the responses will be reply all. This is why Google Forms are so popular. You’ll also see the width and depth of human imagination if you ask someone to fill in a text field answering a question you really thought was straight forward.You might think there’s a limited number of ways to answer something simple […] 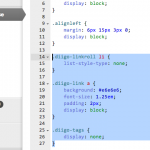 I haven’t found a better way to do the weekly summary posts than Diigo, so I spent five minutes messing with the CSS to make it look a little more like what I’d like. You can do this in WordPress from the WP Admin sidebar under Appearance>Edit CSS. .diigo-linkroll li { list-style-type: none; } .diigo-link a { background: #e6e6e6; font-size: 1.25em; padding: 2px; display: block; } .diigo-tags { display: none; } The first piece (.diigo-linkroll li) gets rid of the unordered list structure. The second portion (.diigo-link a) makes slightly larger text and puts a gray background behind the links- which essentially function like headers for the different articles referenced. The final piece (.diigo-tags) just makes the auto-included tags invisible. I may need to rethink this but it does clean up the post which looked far too messy for my tastes. You can see the side by side comparison below.