Inspired by (or copying depending on your perspective) this Modern Met post.

Find something in your house. Take a picture. Let your imagination churn. Make as many different augmented versions as you can think of. Help others see what’s in your head. 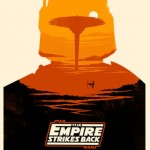