Home > Avatars and their Creators

Avatars and their Creators 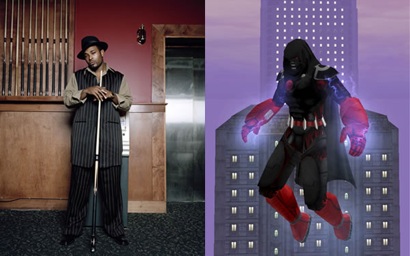 Photographer Robbie Cooper has compiled a set of photos of Avatars and their creators for his book, Alter Ego. New Scientist has a photo essay up with Cooper sharing some of the stories behind his photos. It was fascinating to hear about the varied motivations of the gamers. Their stories may help you build a case for using virtual worlds in the classroom. Cooper’s gamers are not online simply to play. They are socialites, entrepreneurs, pilgrims, and the liberated.

Here’s a slightly modified/mockified version of a recent Chronicle article. Some deletions. My additions in italics. College students were given the chance to ditch a traditional classroom for an online virtual world. Fourteen out of fifteen declined. The fifteenth student was required to return to K12 education to have the rest of the curiosity and spirit beaten out of her. “We’ve taken great steps to make sure all that spirit is gone by 12th grade.” Lamented Ms. Demeanor, a local principal. “I don’t know what could have happened. We failed her. There’s nothing else I can say.” When Catheryn Cheal, assistant vice president of e-learning and instructional support at Oakland University, was designing a course on learning in virtual worlds, she thought the best way to research the topic would be to immerse her class into one such world. Her thought was that the “motivating factors identified in games, such as challenge, curiosity, control, and identity presentation” would help the course along. “Of course she wasn’t thinking,” writes Ms. Demeanor. “How could they adapt to such an environment when we’ve spent so many painstaking years doing just the opposite? Where were the tests? Where were the lectures? She could have killed them.” While the interactive style could be fun, Ms. Cheal’s students worried they were having too much fun. Students […]

Second Life in the Classroom

Peggy Sheehy is a trailblazer. Sheehy is a media specialist at Suffern Middle School. Her daughter nagged her for months to check out a project she was working on, so one day Sheehy created an account in Second Life. It didn’t take long for her to see the potential of the 3D virtual world in a classroom. She took the time to acclimate herself to Second Life then developed a proposal to buy a series of private islands for her colleagues to use as a tool for learning. Now, before you begin to say BUT WHAT ABOUT…, Sheehy has already thought through it. She has a system in place to complete a comprehensive background check for any adult allowed on the schools private islands. There was training for teachers before the students ever saw the virtual world. The students went through comprehensive training that clearly explained what is appropriate behavior on the island. Sheehy said she only had to suspend the rights of one student temporarily. The kids realized right away how special an opportunity it was to be apart of the project and have been very careful with their behavior. Stepping beyond the fear of disaster, Suffern’s Second Life presence has yielded projects as varied as a mock trial based on Of Mice and Men and an Entrepreneur Project. […]