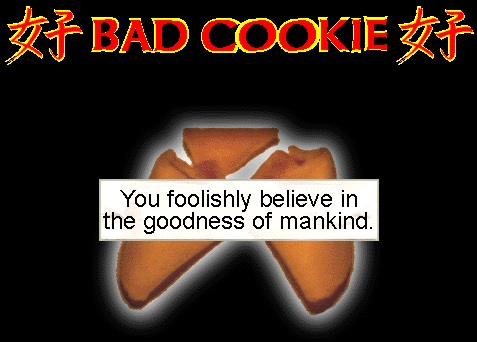 Bad Cookie, a fun site that gives fortune cookie fortunes. It makes a great opening line for a story or set the fortune as the character’s destiny and build the story around making the fortune accurate. It both makes writing the story more difficult and easier. More difficult in that the story now has constraints but it also gives you a starting point which helps defeat that “I don’t know what to write” feeling.

You could also compose a haiku based on the fortune, make it a line in a limerick or translate it into the voice of various characters you’re reading or from the media.

I passed on this Wikipedia list of people who mysteriously disappeared h/t BoingBoing on Twitter last night which led to the following reply from Luke Neff. "List of people who disappeared mysteriously" http://t.co/pKTIGesF53 via @twoodwar reminds me of http://t.co/R4mMhWUsz0 — Luke (@lukeneff) April 17, 2014 “Last year in the U.S. alone more than nine hundred thousand people were reported missing and not found… That’s out of three hundred million, total population. That breaks down to about one person in three hundred and twenty-five vanishing. Every year…. Maybe it’s a coincidence, but it’s almost the same loss ratio experienced by herd animals on the African savannah to large predators.” ? Jim Butcher, Dead Beat I actually read this novel at one point and I meant to see whether this was true (it’s a great writing prompt either way). I did’t know how many people go missing each year in the U.S.A. or what the predation rate is on herd animals on the African savannah. The first part seems pretty straightforward. I did a search for missing person statistics us site:.gov During 2013, 627,911 missing person records were entered into NCIC, a decrease of 5.1% from the 661,593 records entered in 2012. Missing Person records cleared or canceled during the same period totaled 630,990. Reasons for these removals include: a law enforcement […]