I want to be like Alan Levine someday but as I progressively acquire the necessary coding skills I often make do with various kinds of semi-programistan hackery. Today was an example of that and so worth a bit of blogging.

Jesse Goldstein, one of a cadre of most favored sociologists, sent me an email asking how hard it’d be to do a few things with his course site for Understanding Capitalism. He wanted the front page to have –

There are lots of ways to do this. I’m actually confident I could write a child theme to do this . . . but it was fun to do it without that and to do it in about 30 minutes as we sat at the [tooltip title=”With the TV as an external display it’s really a nice way to work with people.” placement=”top”]ALT Lab cafe table[/tooltip].1

Jesse course started out with the tried and true Twenty Fourteen theme. It’s a nice theme but not really the one I’d choose for something with three columns. I’ve really been enjoying Flat Bootstrap lately. It’s nice and clean both in the code and in the presentation and it’s, as the name implies, built on the Bootstrap framework which makes all sorts of neat tricks possible. Some of those neat tricks will entwine with the plugins below.

There are three plugins involved.

Step one is just to divide a page into three columns. Bootstrap makes that really easy. It’s a grid 12 columns across. Want three columns? Divide 12 by 3 and get 4. So each of your three blocks spans four columns.

Since we need three columns we make a row with three boxes that are “worth” four columns of horizontal space– something like what’s below. The Bootstrap shortcode plugin will guide you as well.2

Now that we have the buckets we just need to put the right stuff in the right places and then we’ll add a bit of color/formatting/etc. 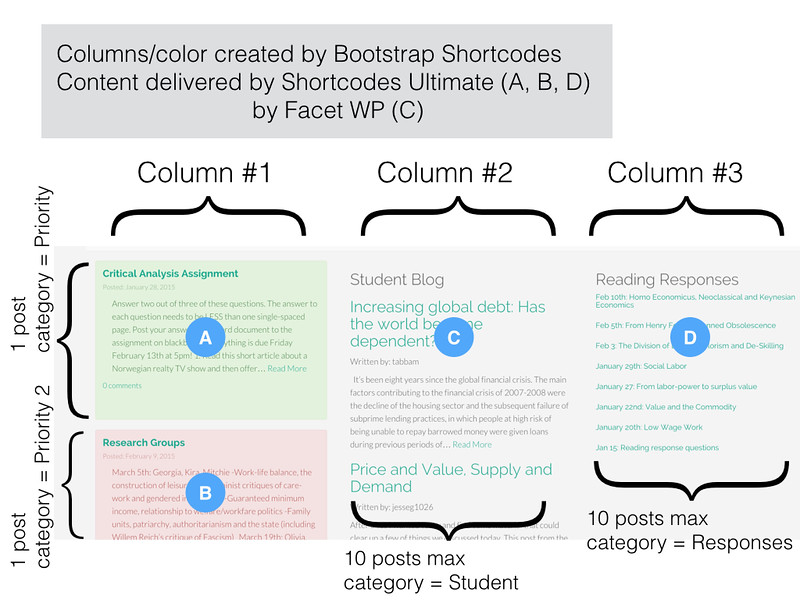 So in column one, we just want to put one post that falls in the [tooltip title=”Obviously (or maybe not obviously), any category or tag would allow you to do the same.” placement=”top”]Priority[/tooltip] category. With the Ultimate Shortcodes plugin we can go to Insert Shortcode>Posts and then fill out a little guide that will help us get the content we want. Despite some limitations for simplicity this works really well for people who might not be able/interested in other options. You end up with a shortcode something like the one seen below.

Rinse and repeat for the second chunk (item B in your diagram above). The only thing changed was to alter the alert type to something else (info I think) to get another color scheme.

The second two pieces are variations on the that pattern as well. I did the second column using Facet WP before I realized/remembered that you can’t put two facet displays on one page. The third column was a repeat of column one but with posts_per_page set to 10. If you do have any need to do this on the fly on a regular basis the Display Posts Shortcode plugin offers far more functionality (but requires more knowledge).

Attempting to link in our examples page via trackback. If this works as long term methodology I think it’ll let me knit all this stuff together without substantially altering what I do and where I do it.

1 [tooltip title=”It works! So meta.” placement=”top”]I’m not sure if I’ll replace footnotes with tooltips. I may also try tooltipping a footnote[/tooltip]

2 I think I got this working

3 You can style a post based on its category but it takes a bit more effort/understanding.

A quick little plugin that sets the password for posts created via Gravity Forms. This came about as the result of a faculty request today. In this case it’ll grab the first form field and use that for the password. You could hardcode it into the plugin itself but I thought this gave a bit more flexibility. With this option you can make that field something that the user could set or you can make it hidden and set it consistently for all submissions. Simple but maybe handy for someone else.

Color Thief is a slick javascript that grabs a color palette from images. I found it after talking to an art professor who was looking to help future art teachers reflect on their work in different ways. Color palettes seemed an interesting way to get at that. I was talking to Larry about this earlier and he wanted to look at color usage for ads in different magazines. I didn’t have any handy but thought I’d throw a few other websites in the mix and see what they look like. It opens up some interesting ways to look at all sorts of visual elements. I don’t know if it necessarily means anything but it provides you the opportunity to argue one way or another. It’d be a fun way to look at ads for toys and the whole gender thing. To make it accessible to people, I made a WordPress plugin. The NRA I was interested in the caucasian flesh tone. I hadn’t noticed that all but oneI missed him twice. of the people were white prior to seeing that. Garden & Gun (Larry’s suggestion) CNN How’s it work? It took a bit to get somewhere decent-ish mainly because I spent some time solving a problem that didn’t exist.Remember that you need to add px or % in the shortcode […]

I was looking to have some people in my class publish lesson plans to their WPMU blogs via Google Docs. So I consulting the dean of WPMU, The Right Reverend Jim Groom, and he made it look so easy. Yet, I failed. Feeling stupid I started drinking looked at the differences in our set up. I began to worry it was because I wasn’t using dynamic subdomains. I reached such a depth of despondency that I actually read one of the error messages from Google itself. It said “Hey Dummy, you haven’t turned on XML-RPC publishing for that blog. Why don’t you go turn it on?” I did and everything now works. There’s a video on how to do that below in case it helps. pub2wpmu