As you can see, the product ended up being more like New Math than a Punnet square but I liked the original title and have no idea what I’d call this post. Anyway, this idea would give students a totally different view of a character if you did it and it would show their understanding of the character (historical or literary) if they did it. Throw in some subtraction, squares or division and things could get a lot more complex. It certainly beats most character analysis/biographical sketches I’ve seen.

You can see the progression of my thoughts below. 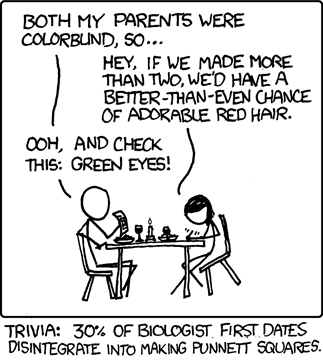 So the original inspiration was this XKCD comic that had been bouncing around in my head for a few days and I woke up one morning with an idea.

As I looked up Punnet square information (it has been a while) I realized a few things. One, it isn’t spelled punnit square. Two, I’d forgotten that they were either really simple or fairly complex, at least for the limited use I wanted them for. So I scratched that idea but I still wanted to do something similar. That’s where the simplicity of New Math came in. I think it’s a pretty decent idea; not great, but pretty decent.

Part of the point here is I read, listen to, and watch a ton of odd things. Things totally and utterly unconnected with education as we know it. Many people would see that as a waste of time. I see it as research.

Here’s a 10 minute video describing how one of our great elementary school teachers is using iPods to help with elementary literacy and reading fluency. The video needs some workI’m still learning and clearly I need to keep working. but the idea is sound and interestingBy the way, iRead is not my title of choice. I don’t put i or e in front of anything by choice.. It’s a bit of a HEF ad but they’re a good group that helps fund projects like this so I’m happy to help them out. iRead Project

Ever trying to follow in the footsteps of Tom, I realized quickly that it helps to add drama and humor into your communication with staff and students. Shortly after taking the Instructional Technology Resource Teacher (ITRT) position, I began brainstorming possible personae to catch the attention of my staff. I finally settled on I created a wall size poster of the image above, laminated it, and hung it behind my desk. I put reminders on it for students and staff. Whether reminders of training dates or loud calls to back up and archive weekly, this poster has definitely caught the eyes of teachers and learners. Taking it one step further, I ventured into film with “Ted Coe”–my twin brother. I casted Ted as a bumbling authority who really had little knowledge of technology, and placed myself next to him as the voice of reason. My most recent project was a series of videos that introduce our county’s Technology Integration Progression Chart (or TIP-C) to the staff. Below is one of the videos. Under it is a link to my TIP-C page with all of the videos. The TIP-Chart Page The teachers are responding favorably to the videos. I think it keeps communication fresh, and it is always nice to be entertained while you are learning something new. This idea could […]