I’ve been doing a whole lot of WordPress customization lately for really widely varying purposes/people. It has been a lot of fun and it’s an option that I’m not sure has been conveyed well to our faculty.

Many times, faculty are looking for a process for students (or one another) that is semi-structured. The students have options but they need help remembering to do certain things (include at least one image, consider these three topics, add a link, etc.) or they need a bit of guidance to help create uniformity of some sort. If you’ve ever asked more than ten people to answer three questions in an email then you know that virtually all the humans fail to follow directions when given the chance.1 You’ll also see the width and depth of human imagination if you ask someone to fill in a text field answering a question you really thought was straight forward.2

There are also concerns about the complexity of WordPress that we can address through custom post types and custom user roles while still allowing for a good deal of flexibility within our established constraints. This interplay of custom fields, custom post types, and usually a custom theme to display the former is probably best seen in some examples. If you read this blog, you’ve seen me handle this before with Gravity Forms. You’ve still got that option but getting a bit deeper into the coding side of things enables a much greater degree of control and I think you’ll see some advantages (admittedly with increased overhead on creation/modification).

The pieces below will just explain what happened, why, and what it enables in two projects. I’ll probably do individual posts on the code behind it at some point in the future. 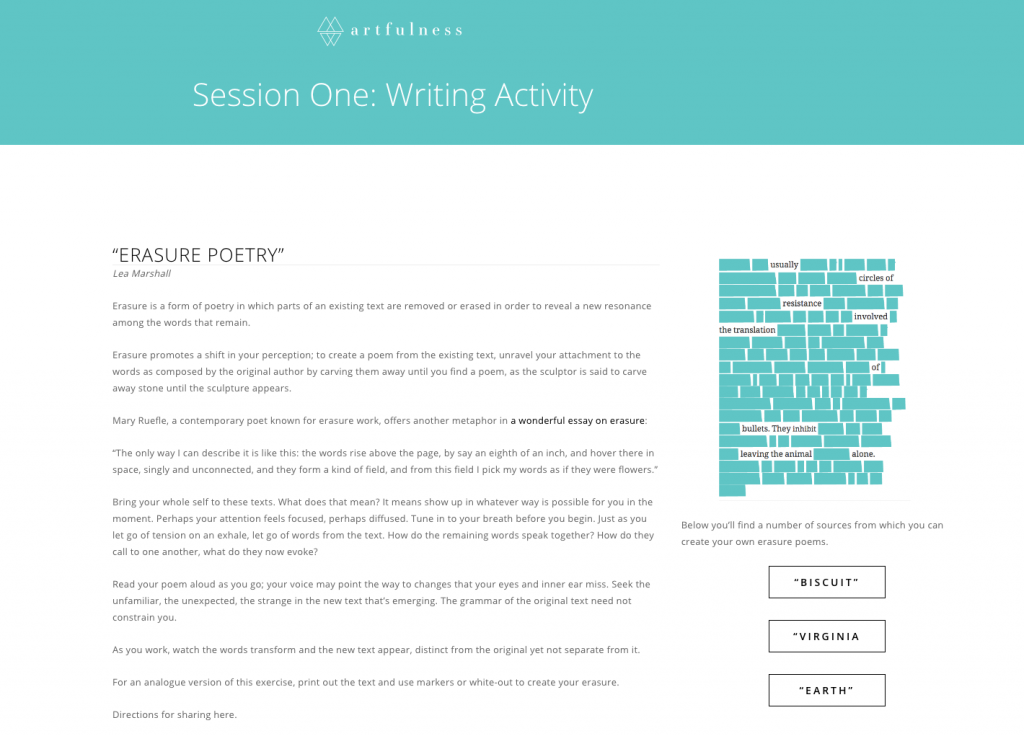 I’ve been working on allowing users to submit blackout/erasure poems for a really fun project Molly is running on Artfulness (mindfulness meets art as created by VCU faculty).

This is based on a custom post type. It was done mainly to allow for a different layout/look and to separate the content from the regular pages while still allowing for parent/child relationships (the blackened poems should be associated with their source text). No one wants a bunch of wacky poems overwhelming their pages list. In this case, I was also trying to do it purely through a plugin rather than needing an additional custom theme. 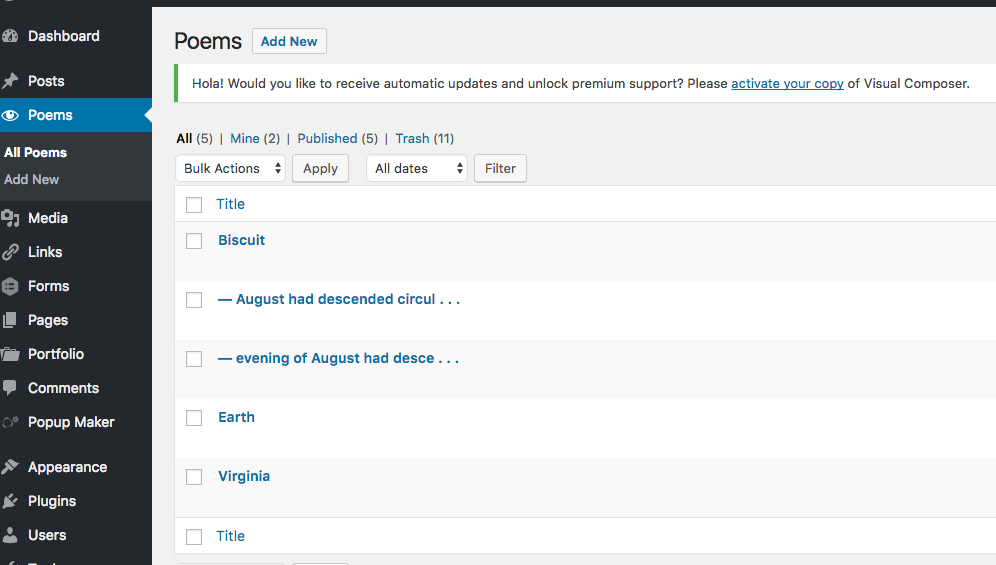 Poems have a title and body like a normal page but they have three additional custom field elements- a source title, source url,3 and associated Gravity Form.4 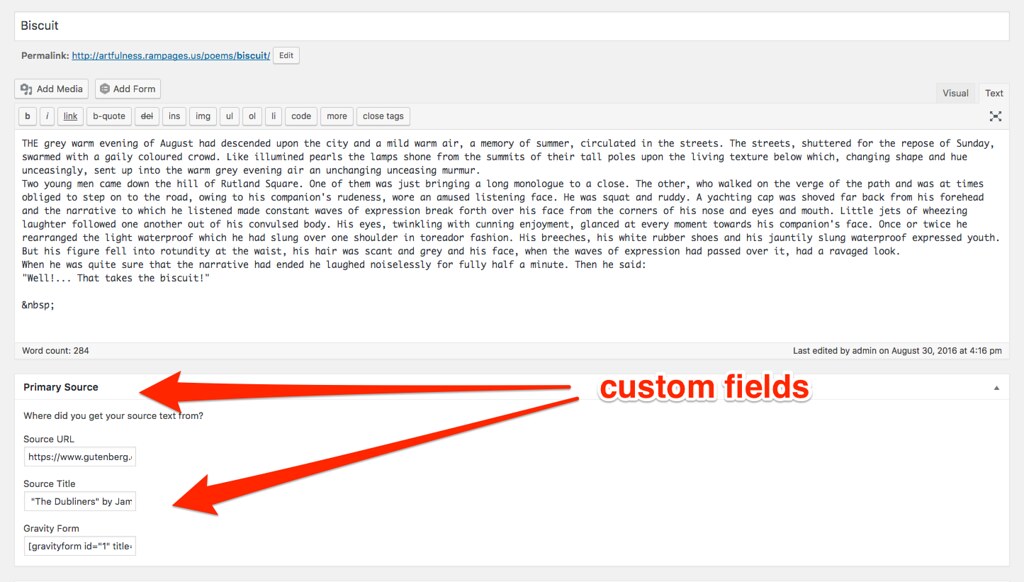 That’s nice and organized but it also lets us do a custom display and associate the poems in ways that help us navigate. 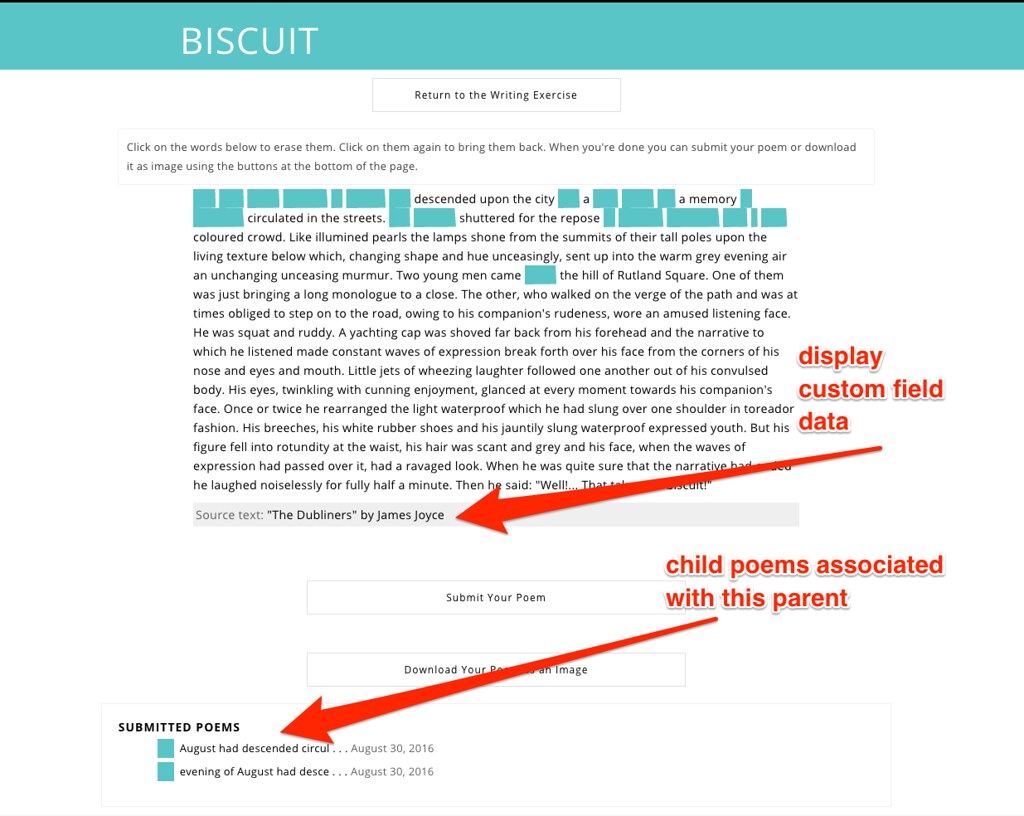 So it looks pretty good so far. Once the site it live, I’ll link you to the actual site. 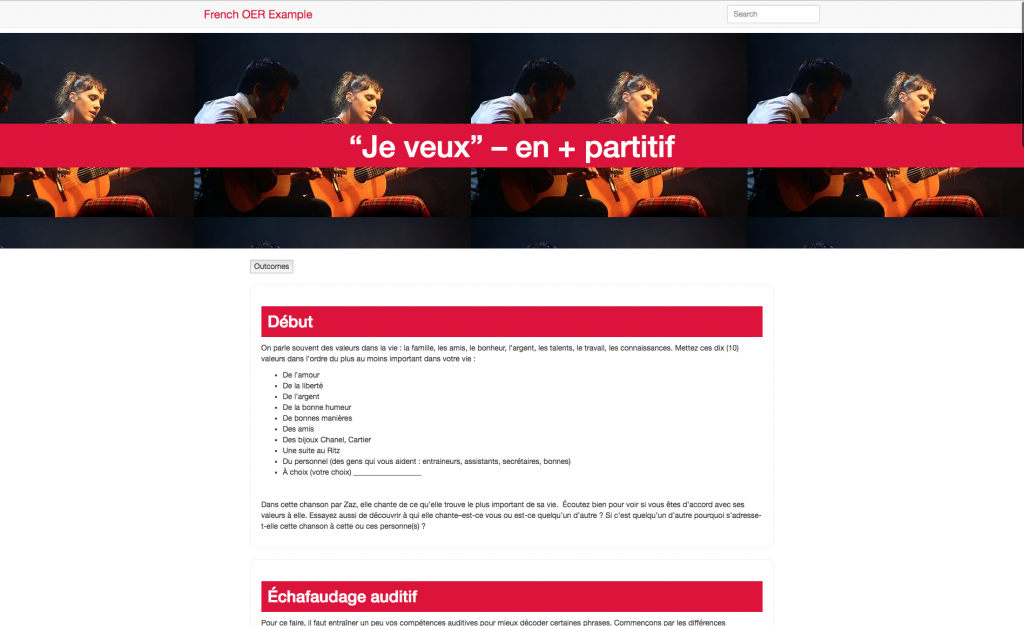 The goal was to create some consistent structure for the creation of language lessons. I built a custom post type called ‘Modules’ and it’s composed of a few different custom fields. You can see the breakdown below but essentially it’s guiding a faculty member through the main elements of construction they’ll need to consider but not binding them regarding what’s in each element. They have the freedom to put in images, links, and format the text in each component just like they’d do in a typical post. We just have the advantage of being able to guide that entry and then do more interesting things with the results on the display side.

In this particular case, I used ACF to create the custom fields. That was mainly to see if it was much faster/easier than doing it via functions.php. I don’t think there was much difference on my end but ACF does allow faculty to change directions or modify elements of the custom fields which is a big deal if you’re working to increase their independence and enable a deeper ownership of the site. It may or may not help my support request load. We’ll have to see. 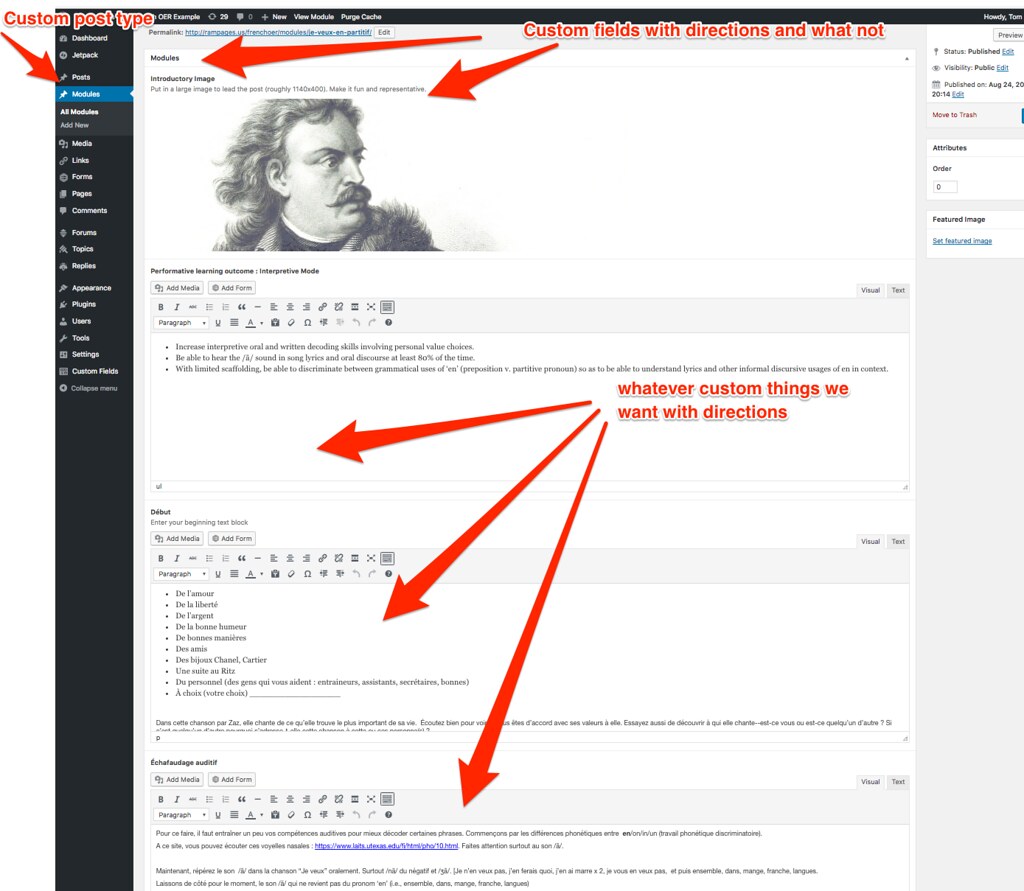 Since we can easily isolate the ‘learning goals’ as an element (rather than trying to parse it out of the post content as a whole), we can customize our theme to treat it very differently. In this case, since it’s a section that’s mainly targeted at the professor, I made it a collapsible/expandable section via the theme.

I also did some display work to better delineate the segments of the lesson etc. It’s the tip of the iceberg in terms of what might be done given time/interest. The bottom line being that WordPress can be what you want/need it to be if you’re willing to invest the time and energy.

1 Inevitably, you’ll get anywhere from 1 to 12 questions answered and you’ll be presented with 17 additional questions, 9 complaints, and a link to something off-topic. 60% of the responses will be reply all. This is why Google Forms are so popular.

2 You might think there’s a limited number of ways to answer something simple like “What’s your favorite website?” but you’ll get everything from titles, to sentences, some URLs, URLs with sentences, a poem that includes HTML and someone will somehow submit a video where they tell you about their website.

4 I ran out of time/patience with non-user authentication in the REST API . . . a failure but I did learn quite a bit. 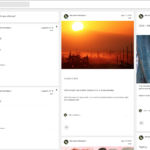 Origin Story There once was a group who really liked Google Plus. With the demise of the service, they were unhappy. With this request, I wondered if we might just build a very similar experience in WordPress. I think I ended up getting pretty close. The Look The theme is built using our normal pattern of bending Understrap so it uses Bootstrap at its core. The theme is here. I don’t know if this works decently or not (vertical slider gets kind of lost) but I took a shot at making the WordPress theme comparable to the Google Plus layout using juxtapose. If you’re anything like me, you have no real memory of what Google Plus looked like and I want you to appreciate this. Luckily I still have access to G+ through my VCU account for at least a while longer. The Masonry Grid I didn’t think too hard when I opted to make the initial masonry layout.Masonry (like bricks) is a fancy way of saying it all fits together even if the pieces are of different heights. This has been a hassle in HTML-land but has gotten easier. Masonry will help you find other solutions. I used what seemed like a really handy path. What I didn’t pay attention to was that this particular masonry-sort goes top to […] 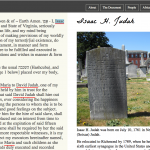 One of the projects that Ryan Smith chose as part of our Digital History course was the collaborative transcription and annotation of a historic Richmond will . . . describing it thusly‘Thusly’ . . . I know but it sounded better than ‘as follows.’ in the syllabus. Collaborative annotation: To further put our emphasis on collaboration into practice, we will annotate [explain, contextualize, add to] together one document, the last will and testament of Isaac Judah, an early Richmond resident. This assignment will require student research, online or in person, to help explain and contextualize this document for a public audience. What software platform should we use to markup the item? How should we handle the will’s transcription? Who are the parties mentioned in the will? Where are the locations? What historical lessons can it teach readers? The quality and quantity of each students’ research/commentary will count as 10% of the final course grade. The will can be found on our course website, in the Google Drive folder. The transcription file is: https://docs.google.com/document/d/1ghG-oyFvyza-zRUE4ZJf0_HF4_D5dey4Bv4BmM5JYFQ/edit. Annotations can begin as soon as the course begins and should be finalized by February 23 March 30. If the annotation is fruitful, we may post this result for public consumption. We ended up with quite a bit of work . . . in fact so much […] 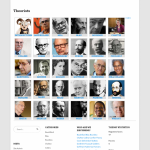