Unlike Jim Groom, who only lavishes surface praise while harboring deep hatred, I truly respect the Bava and integrate him into our family’s holiday traditions1. I had to make a hole in the back of Jim’s head to let some of the hot air out. Still needs some work though as the candle keeps going out.

1 You should see what Santa looks like in our house. 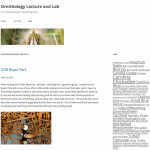 Sometimes it’s the tiny, little bitty things. This is one of those times.Other times your post title is only mostly misleading. Issue: Lesley Bullock is an awesome ornithology instructor who has all her students doing field work and they’re aggregating their work to a main mother blog hub. She is even having them record and upload bird songs which is entirely awesome. The problem was that when aggregated, the built in WordPress player wouldn’t show up. Oddly, it’s there in the code. I could see it there taunting me (below). However, the visibility was set to hidden. Once I realized the content was coming in, I tried the least invasive response- that is I just tried to override the CSS using the custom CSS option in Jetpack. No dice. Given that this is hardcoded into the post at the element level that wasn’t a huge surprise but it was worth a shot.Oddly enough if you add an additional audio file or even repost the original everything works as expected. I have no idea why. I couldn’t find anything that flipped any switches and eventually gave up on that track. I considered a few other options- Feed WordPress advanced filters, altering the core WordPress files . . . and they either wouldn’t do what I wanted or they felt too dramatic […] 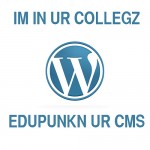 WordCamp Ed is a WordCamp focused entirely on educational uses of WordPress — in schools and universities. The inaugural WordCamp Ed will be held at George Mason University on Saturday, November 22nd featuring a morning of pre-planned speakers, and a barcamp-style afternoon breaking into smaller discussions and sessions. SIGN UP NOW! I’ll be there and I’m hoping to see some of you. 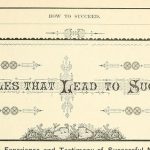