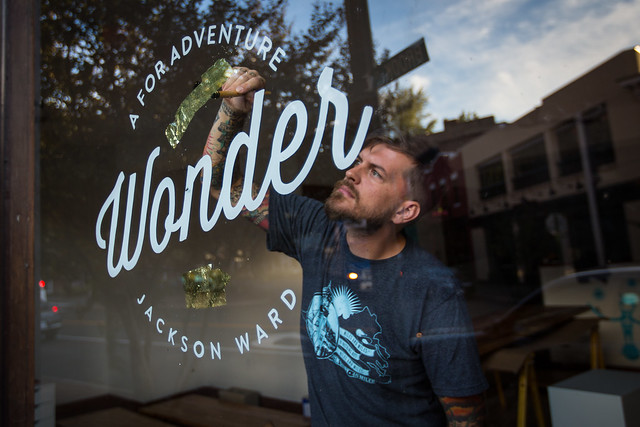 As part of the Connected Courses MOOC, we were talking a bit about understanding different networks and how to both navigate them and use their vocabulary/tools. The picture above captures a few interesting elements along those lines.

I took the picture walking to work. It was one of those fortuitous moments which happen much more often if you’re out looking for them. After getting the nod from the artist (I now know it was Ross from Sure Hand Signs.), I took a few shots and really felt I’d gotten one or two that captured something interesting.

I am experimenting a bit with triggering the Flickr Explore algorithm and developing more of an audience for my photos in a way that doesn’t make me feel dirty or hypocritical.

I put it up on Flickr when I got in- something I do only if I’m really excited about a photo which happens less often than I’d like. I usually wait until late at night or the weekend to download/upload images.

One of the things I did was title it clearly. I also included a variety of tags and added to one group (Flickr Today). It seems adding the picture to lots of groups would end up being punitive in the land of the Explore algorithm because people try to game it that way.

In less than 12 hrs, Jiminy Crow, one of the people who works at A for Adventure, had commented telling me who the artist is. That alone was pretty nice. From there things, got rolling pretty quickly. A few favorites later, it made it to Explore and then made it into the top 50.1 Now it’s been seen almost 44,000 times which is kind of crazy. This type of popularity is pretty fleeting but does have some residual effects.

I don’t see this as representative of quality or something that will rule my world but it is a way to get a larger audience. I certainly have a lot more people following my account than I did prior to this shot. There are all sorts of variables that play into this game in addition to the algorithmic ones and ways to try to influence the system. I dabble in it and seem to be understanding bits and pieces. I’ve had 5 pictures make it into Explore this year vs 3 in the last 7 years. It’s likely a mix of things. I’m certainly taking a lot more pictures and I think I continue to get better but it is a bit about playing the game and understanding what types of pictures are successful in this type of environment. I consider this a bit about network fluency, a bit about metacognition, a bit of marketing, some metadata/social media, a bit about psychology, and a bit about photography. It sounds like a pretty good argument for interdisciplinary studies. 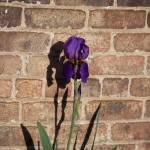 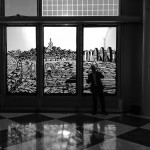 This should have been something more impressive given it’s week 100 but life intervenes. I do think I’ll have some unique stuff coming up as I hit Open Ed and get to visit Brian Lamb at TRU. 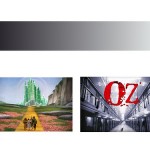 Walking at Work and VSTE – Week 5

I spent the first two days at the VSTE conference so I’ll throw a few of those in here as well. My summary of the conference ranges from a conversation with Andrew Carle about all sorts of things from Markov and Beautiful Soup to the other end where I watched 50 or so people sit in a room to watch a woman Google Hang Out in (this needs a better verb) to show them how to click around a website. People came. Lots of people. No one walked out. I really don’t understand. VSTE conference attendance is about $350. I also did a few presentations at VSTE. One on OER stuff where I continue to try to convince people that content is the lowest bar and that the open tools, people, and communities are the things that make that content valuable. I’ve talked about that enough here before not to launch into it again. I did another presentation called something odd like “Rethinking Professional Development.”Interestingly, I didn’t submit any sessions but someone must have put my name down. As they didn’t have any description, I did most odd things I felt like. In this case I attempted to really provoke some conversation from the crowd by putting up some hyperbolic slides and then provoking additional chaos. My initial plan was […]