You’ve got the reluctance you normally see (funny but done in lots of things) but you also see something of the pomposity and threat possible in the “change agent.” It’s easy to end up seeming/being** pompous when you believe your way is clearly superior and you want others to adopt it.

*honoring the past does not apply to crazy things like the Nazi party, cult membership etc.

**There is a difference – seeming pompous means you’ll still listen to others despite coming across as a know-it-all, being pompous means you won’t listen because in your heart you do believe you know it all. There’s a fine line between advocating for something and becoming a zealot. 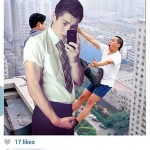 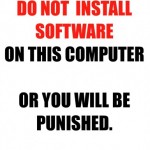 I had two future teachers in my class last night complaining about a syllabus that it wasn’t scary enough for 9th graders, that they needed to have more fear put into them. The whole “don’t smile until Christmas” thing came up as well. It’s a popular mindset among teachers. I tried the tough guy route for a while. I could do it. It was effective. It also made me miserable and very, very tired. I ended up going the opposite way in the end. It made me feel better and I really got much more out of the students in the end. I tried to have as much fun as possible at all times, even with discipline. Here are two fairly amusing (at least to me) examples from when I was an ITRT. 1. Problem: Students weren’t allowed to install software on their computers, especially not p2p stuff like Limewire. Naturally some people did it anyway. Solution: I had a copy of ARD and would occasionally send out automated searches for stuff like that. When it was found I’d follow this process from my secrete lair. Copy the offending program icon. Erase the program. Make a custom warning sheet (see below). Making it say the student’s name is key. Those little touches mean so much. Replace PDF icon with icon […]