In working with students in the Digital History course, we’ve repeatedly bumped up against the idea that it’s harder to make a cohesive argument on the Internet (vs a traditional paper) or that constructing a web-based exhibition abdicates controls you have in physical space. There are frequent examples of archives referenced in the texts (Valley of the Shadow for instance) but for various reasons (age, limited time/space/knowledge) there aren’t many decent examples of constructing a multimedia argument or experiential/immersive examples. So here’s an attempt to show some sites that are far more than a-bunch-of-stuff-on-the-Internet and some elements that help them do that. 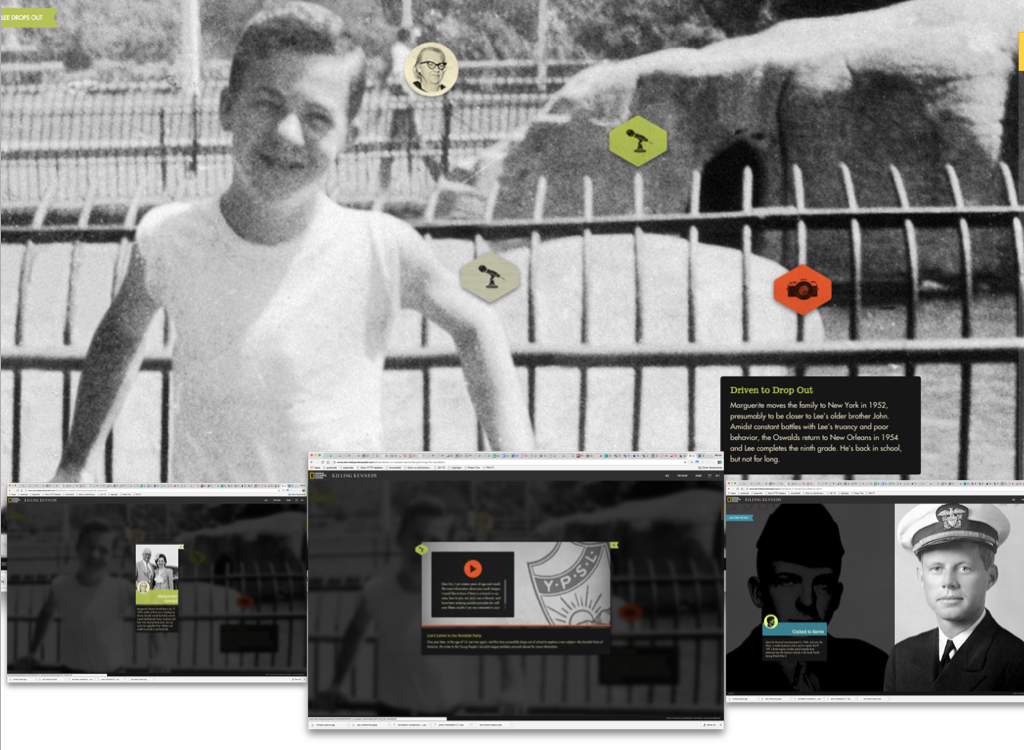 It’s a bit heavy on the parallax for my taste but it’s a pretty direct parallel to a museum exhibit. It sets out to parallel the lives of Kennedy and Oswald reinforcing that parallel with visual metaphors (split screen transitions, similar images etc.) to reinforce that concept. There is a main text-based storyline, music to reinforce a certain mood,1 and the ability to see supporting elements by clicking on various items. The movement through the site is very guided. The links are kept within the site and remain contextualized rather than leading to other sites. The ancillary materials are a mixed bag of audio, images, video, and mixed media. Digital primary source materials are used throughout to drive the narrative.

A Huffington Post piece that looks at the impact of the refugee crisis on the world economy through four different geographical areas. There is a clear argument and interesting mix of media that explain and support both the facts of the article and the emotional resonance. While this is modern journalism, it tackles many of the same issues that would be dealt with in a history paper and supports the narrative with maps, quotes, images, video, diagrams, and data. 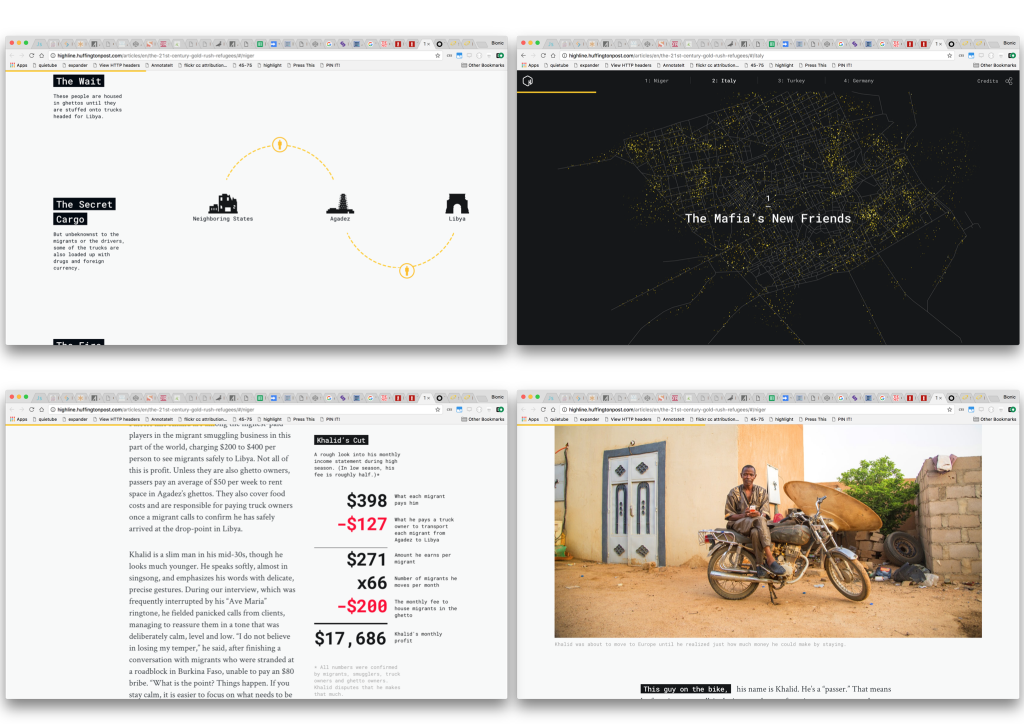 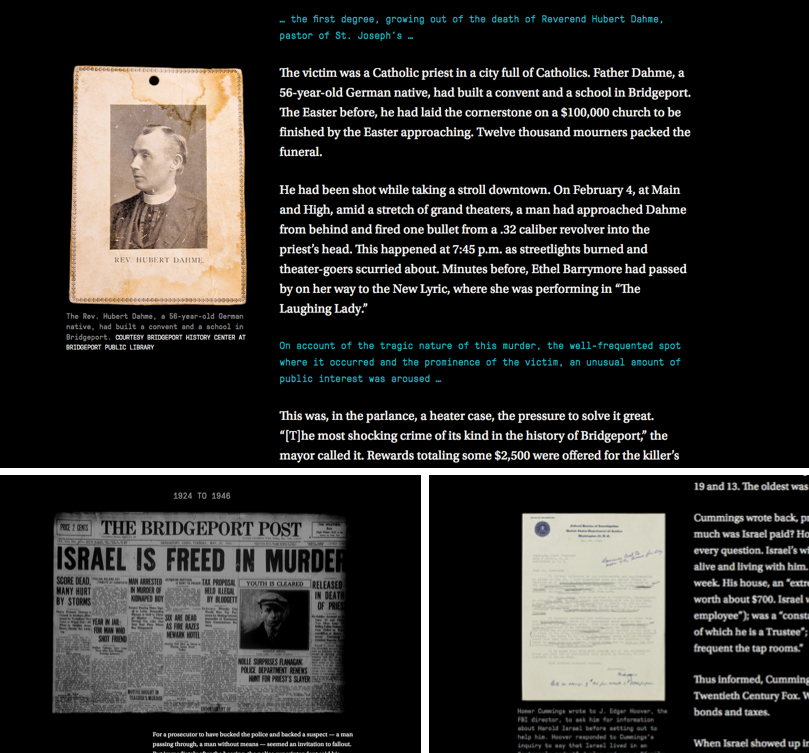 The story of a court case and its aftermath. There’s a nice mix of primary source materials. I particularly liked the use of an alternate font and color for the court transcript elements and how they were juxtaposed against the article itself. 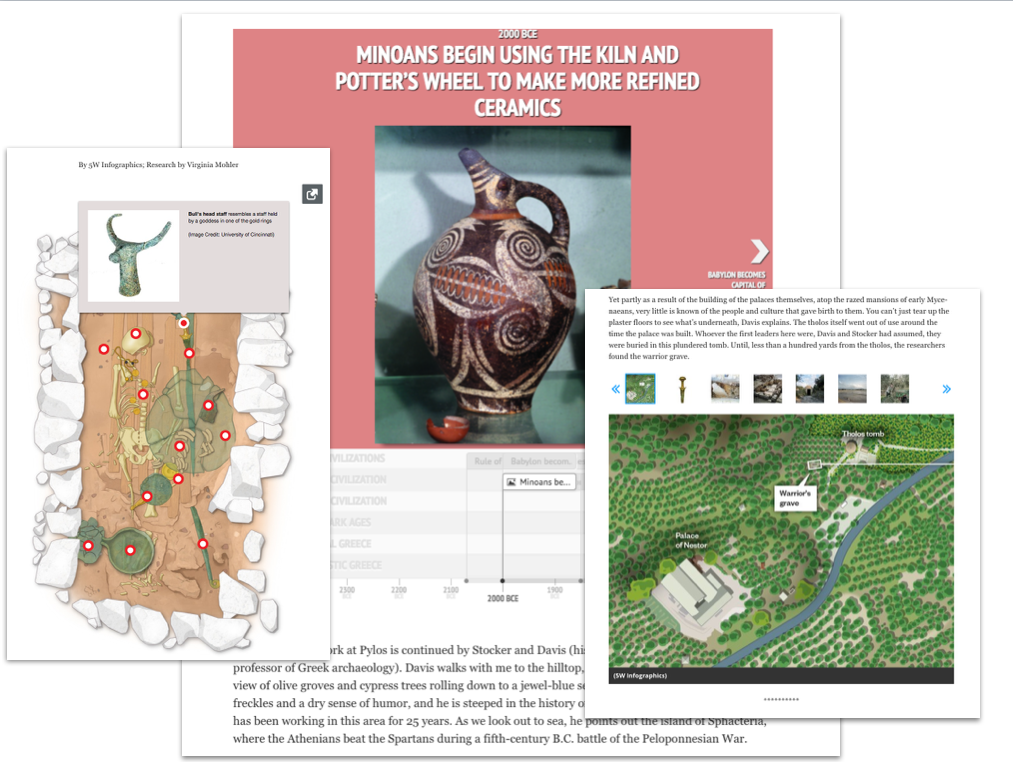 What We Thought We Knew About the Roots of Western Civilization

While less cinematic than some of the other examples this is a strong article that uses timeline.js, a slideshow feature, maps, and an interactive diagram of the grave to provide a lot of information.

Clearly, these sites were serious commitments of time, resources, and expertise. Not everything can be that but I find that seeing examples that are pushing the envelope helps me readjust my aim to higher things. Paying attention to how they transition between supporting topics, how font/color/animations work together, how media supports the text (and vice versa) — when done well it’s impressive stuff. I also take note of what frustrates me2 or things I don’t like.footnote>auto-playing music I also use Emmet Re:view to see how they dealt with displaying some of this complexity in multiple screen sizes.

I tend to find these examples on the edge of or firmly in the field of journalism.3 I can’t help but see strong commonalities between education and journalism. Some of my favorite tools for educators are built for journalists by the Knight Lab.

3 This is a great site for long form journalism.

In my district we have 12 middle school people who focus on tech integration (one at each school). We all create lessons and share resources with our teachers but have not until now worked together very consistently/effectively. So at our meeting on Friday we hammered out an idea to what is outlined below. I’ve been wanting to do this for a long time and while I do fear I am being naive in some ways I have high hopes for what this might become. There’s only one lesson there right now- but it’s been a busy weekend for me :). The current incarnation- ITRT Plans a blog for posting good lesson plans in a semi-structured manner including documents (rubrics, instructions, notes, whatever) samples of student work from the lesson a little reflection on how things went, ways to improve or how to change things I’m using a lot of images if possible and installed the snap.com preview script. Visuals are often a deciding factor for me and I imagine the same will be true of others. if someone uses or adapts the lesson I’m hoping they’ll add their experiences and how they changed things Lessons will be grouped according to subject and tagged according to VA SOL and keywords. a group del.icio.us account since a number of us have our […]

Image from page 96 of “St. Nicholas [serial]” (1873) flickr photo by Internet Archive Book Images shared with no copyright restriction (Flickr Commons) I’ve talked to a number of people a number of times about seeing faculty using Feed WordPress to syndicate content to a motherblog when they’d really be better served by using a feed reader like Feedly.Obligatory RIP Google Reader (and Fever for that matter). Feed WordPress is great and very useful but if you don’t want to archive the content or take advantage of some of the more advanced options (auto-categorizing, auto-tagging, doing stuff with author pages etc.) then it usually is a bit more hassle than it’s worth. I thought it’d be pretty easy to build a little custom page to display a series feeds from sites in one place. It took me a bit to get it straight but it wasn’t too bad. This example loads 10 sites fairly quickly. I’m currently just showing the source site’s URL and the 5 most recent posts with titles and dates. It’d be easy enough to add other stuff – excerpt, full post content, featured image etc. It’d also be pretty easy to pass the URLs to the page from a Google Spreadsheet which I’ll probably do in the near future. See the Pen wp json api multi […]