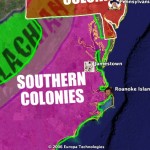 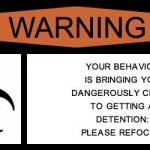 Looking for a way to refocus your students without having to stop class to speak to them? Want to maintain your street cred as a hip “techno teacher”? Well, check out the Warning Label Generator. You choose the label style, icon, and message, and the generator spits out a jpg. Save it, copy it, laminate it, drop it like it’s hot on the desk of that student who doesn’t seem to get the concept of an internal monologue.

“Hop the Pond” for a great illustration

I happened upon this BBC site while tutoring a student last year, and I used it this year in my classes with great success. It’s an interactive activity that shows the student how adjectives and adverbs beef up a simple sentence and change the image the sentence places in our heads. My students loved it, and they really started to understand how descriptive details are often well placed adjectives and adverbs.

The Jet Set Show recently posted a project entitled “Brandon’s Pitch”. Brandon has developed a basic set of characters and some conflicts between them, and he would like the general public to suggest possible story lines. He will take the suggestions into consideration when writing the script. This might be interesting to follow as well as a possible model for collaboration in a number of your classes. Link to Wiki 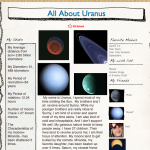 The Planets get Pages!

So far two science classes have now used iWeb to create social software pages for the planets. It went very well. The kids did a great job and really showed both creativity and a good grasp of the subject. There are some great quotes in there. One of my favorites was “I guess my life started out after that huge bang . . .” I also liked that Saturn’s secret shame was jewelry. I’d recommend checking them out- Jupiter Mars Venus Earth Mercury Uranus Pluto Neptune Saturn