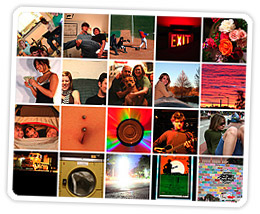 Photojojo, one of my favorite DIY sites, has a great post on taking a photo a day for a year. Imagine getting your students to snap shots (maybe around a common theme, maybe without any boundaries) and post them to a blog or flickr. This raw material could be used for discussion or as writing prompts, web publishing lessons or [insert your idea here–serious].

I’m inspired and plan to take on the challenge–using only my camera phone (low rez 4 life!).

So I worked with a great ITRT and former science teacher, Gaynell Lyman, to look at ways we might use both Swivel and the googlelookup function in google spreadsheets to see what we could do to save time and get to the actual learning. Concept We wanted students to be able to see how various factors changed as you move across the periodic table and how they interrelate. The goal was also to have them look at the charts and manipulate them to figure out these concepts on their own. Steps The idea was not to get them to look up data from a chart and re-write it in another chart so we opted to try using google’s lookup function. It performed pretty well but wouldn’t look up some of the values we initially started with and with some of the others it opted for slightly different formats for the same concept (like 185 mu or mu 185). A minor issue but one to look for. What we did was list the elements in column A, in column B we did a googlelookup of atomic radius with the formula =googlelookup(A2,”atomic radius” and then a similar formula to get the data for electronegativity. We were hoping to get a bit more data but the lookup function, while neat, is still pretty […]