This collection of dashboards1 was brought on by a tweet2 from Dan Meyer but precipitated by the fact that I am struggling to figure out what matters in terms of a future LMS and how the data we present (or don’t present) to students and teachers impacts education as a whole.3

In the end I see the data displayed to students and teachers as being pretty important but it means nothing if it’s not set within the right context and used in the right way by both parties.

All that aside, let’s see what’s going on right now. 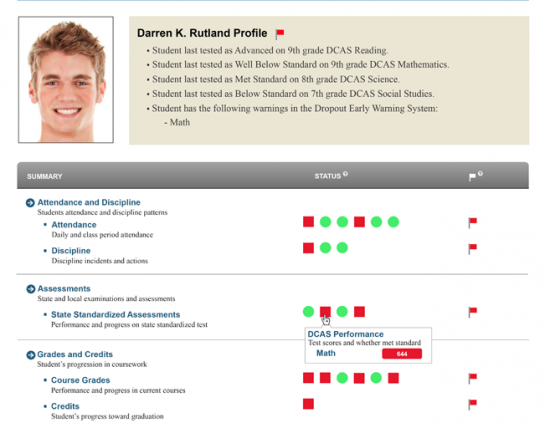 Fairly traditional, I’m not sure these dashboards are even meant for student view but many of the systems I’ve seen lately just give students access to their own data with the same views they give teachers and call it a student dashboard. One of the things that concerns me here is the green/red binary system. There is no room for even a yellow in this world view? Even if your focus is purely on test scores, this kind of thought disregards the importance of scores that fall immediately below and above the cut score. Those scores can easily go either way so seeing green may lead to unfortunate degrees of over confidence.

Despite having one of the worst icons I have ever seen, EquipSchools has some interesting pieces to this dashboard.

Note the motivation/stress/energy/engagement/homework chart on the right. I’ve seen some people6 encouraging students to input those kind of data that through Twitter like status updates that use emoticons to indicate the emotional state but this is the first I’ve seen of something more sophisticated. It would be interesting to have those kind of data as a student and as a teacher but it seems like they have an awful lot of categories. I can’t think of a way to gather those data without it being either burdensome (and thus not done) or ineffective. Their method, multiple strand Likert scale ratings, seems to be presented in a way that ties it too loosely with time and too tightly with projects for it to be as useful as it could be.

I like the idea this seems to support. Students ought to set goals and the software ought to facilitate that as well as the tracking of progress towards those goals. While that’s a relatively obvious idea, it’s not often done. Most student data dashboards are purely passive visualizations of test data.7 If you’re lucky you might get a mouse over for more information or a dynamic chart. 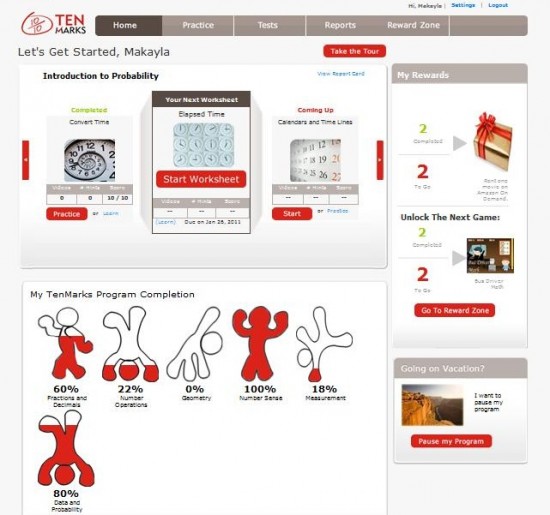 This is one of those dashboards that seems to creep up too often in education. It tries to make the data fun by letting you fill up these wacky body shapes with blood.8 It’s pretty much useless for student reflection and really only shows progression along a predetermined path.

You can also see some attempts at “gamification” going on in the sidebar. Apparently you can earn presents. This type of thing would prepare your children well to succeed in College Apprentice where they can accomplish feats and win awards by generating points by attending “events hosted and supported by College Apprentice.”

Read 180 pulls out all the stops on the “gamification” bandwagon. I almost expect to get some virtual chickens for my virtual farm if I read enough. Personally, I don’t like this mentality. I fear it’s going to catch on and I imagine it motivates certain kids. I don’t think it does anything to help them learn or reflect on what they’re doing that might impact their learning. I don’t think it’s aiming too high to expect that.

1 A pretty imprecise word that appears to mean quite a few different things to different people.

3 Someplace I have an interesting way that someone was visualizing learning along five thematic branches (content, critical thinking, etc.) and displaying it as a star/pentagram in order to help reflect the idea of balance. For some reason I thought it was an NSF grant but I’m not finding it currently.

5 Yep, frog is still there.

6 I think it was eSparks but their website tells you nothing. I’m also pretty sure Dell’s new personalized learning environment does this as well but I can’t recall if they aggregate the results for student reflection.

7 CosmicMath seems to be a good example of that.

8 It’s bright red, apparently liquid, and in a body. What else could it be? 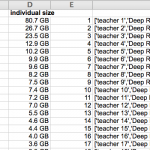 The Future of Search

It has been interesting to see the excitement surrounding WolframAlpha . The new “Computational Knowledge Engine” called Wolfram|Alpha has gone through a full media cycle before it has even been unleashed on the world. It has been hyped as a “Google Killer” and denounced as snake oil, and we’re still at least a few days from release. The simple goal behind the engine is to connect searchers with precise information. Wolfram|Alpha’s search magic comes through a combination of natural language processing and a giant pool of curated data. That quote is from Radio Berkman (which is a very interesting podcast out of Harvard Law) and they’ve got an interview with the creator as well. Watch the abbreviated 10 minute version below. I’m not sure how well the idea of a curated semantic web will work (although I can understand that urge). This does really show a different way to think about searching for information. It really takes it beyond search, making it closer to exploration maybe. It’s similar in some ways to one of David Huynh’s Parallax project (of Simile Exhibit fame) which has been out for quite a while now. Video of that is below. Freebase Parallax: A new way to browse and explore data from David Huynh on Vimeo. While the media may be portraying Google as being […] 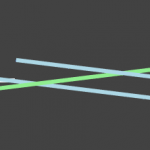