I don’t want to be the “creepy guy with the camera” that D’Arcy mentions in his #ds106 talk but I do want to be able to capture certain images and interact with other humans in a variety of ways. If I can make myself keep trying these I’m hoping, eventually, I will have the banter and people skills down well enough to do this without it being awkward for both parties.

Taz was chosen in part because he didn’t look like he’d be worried about me- camera or no. He’s pretty much the exact opposite of the first portrait. I learned his name but nothing else about him. I did not need to tell him not to smile. This experience was different than the first stranger photo but not any better in most ways.

You’ll also notice that the pictures is out of focus as well but we’ll cross that bridge when I can focus more on the photography and less on the human interaction portion of things.

I will say that this would make an interesting project to do in a school. You’d have to prep students properly but it would be interesting. 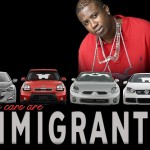