Tweets as Presentation: Reflecting on #pressedconf18

I took the opportunity to participate in the #PressedConf yesterday. Described as “. . . a twitter conference (#pressedconf18) looking into how WordPress is used in teaching, pedagogy and research.” it was a pretty impressive number of people and topics covered on Twitter in roughly 20 minute “Tweet storms.”1 Presenting on Twitter was something new to me and I tried to think through some interesting ways to approach things. Given how limited Twitter was I tried to tackle complexity in a few different ways while taking advantage of the way Twitter treats different content integrations. The Post I ended up deciding to build out a WordPress post with various sections that were associated with a number of the Tweets I’d make. I used good ol’ anchor links in the Tweets to be able to link specifically to those sections without having to resort lots of little posts. For example – brings you to the Custom Composition section directly. Not very visual on the Twitter end and probably cheating in the scheme of things. The Videos I tried to tackle other complexity through videos. I made a number of new videos and took advantage of a few others I’d had to try to show more details. I kind of wonder if this worked well. They appeared in two different ways. Some […] 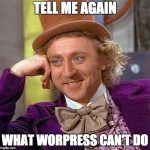 This is my supporting documentation for the #PressEd WordPress conference that I’ll be doing via Twitter on Thursday. The Topic Given I’ve been playing around in WordPress since what feels like the dawn of time, I’ve heard lots of people say lots of things about it. I’ve heard it’s too complex. I’ve heard it’s too easy. I’ve been told it won’t allow you to map/GIS information and that it can’t be used for any number of other things. I’ve been told it won’t do things that you can do in this other CMS or that other LMS. As with most things, these boundaries are mostly imaginary and live more in people’s heads than they do in the software itself. My goal here will be to take you on a tour of what you can do to impact the authoring experience in WordPress. We’ll start by removing complexity from WordPress itself but staying within the typical authoring patterns. We’ll do that in the easiest ways first and then move to more involved interventions. After that, we’ll jump to non-standard authoring patterns and run around seeing where the edges are. Minimalism/Reducing Complexity Screen Options There’s quite a bit of control you have just within the Screen Options settings available to the author. If you can check/uncheck a box these options are available […]