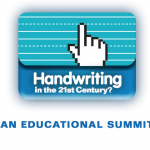 I read a portion of this article on keyboarding being overrated. I don’t know if that’s true or not. I’m not really aggressive either way. I do think it makes little sense to make two different ways to make the same letters. Montessori leads with cursive and I tend to think she’s done a better job thinking this through. Anyway, I took at look at the first paragraph with apparent proof. Brain scans during the two activities also show that forming words by hand as opposed to on a keyboard leads to increased brain activity(pdf). Scientific studies of children and adults show that wielding a pen when taking notes, rather than typing, is associated with improved long-term information retention, better thought organization, and increased ability to generate ideas. Link one leads you the Zane Blosner sponsored Handwriting in the 21st Century? Educational Summit. Zane Blosner also sponsors the national handwriting contest where I’m very sad to say you cannot see the winners’ handwriting. Let’s pretend this summit1 isn’t run by a company that sells handwriting solutions. The majority of brain related references here are cited as James, K.H. “How Printing Practice Affects Letter Perception: An Educational Cognitive Neuroscience Perspective.” Presented at Handwriting in the 21st Century?: An Educational Summit, Washington, D.C., January 23, 2012. I believe that’s Dr. James. Seems legit but I […] 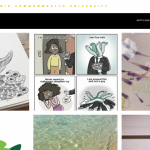 Back when Instagram’s API rules didn’t completely suck, I wrote a few posts on scraping it so that some of our faculty could use those data in their research. Then all their rules changed and everything broke. That’s their prerogative but it’s also my option to complain about it. But because I posted about it, I got a comment from raiym1 who let me know he wrote a PHP scraper that avoided the API limitations. I’ve now got that up and running and set up a simple GET so that the URL determines the tagged content that is returned. The PHP for that page is below and allows you to replace the API URL in the old Google Scripts with a new url like http://bionicteaching.com/creations/ig/scrape.php?tag=fish You can then make your own custom displays based on that. I made a quick custom page template for the artfulness WP theme (currently showing filler data from the exciting ‘fish’ tag). This example has the tag hardcoded in but could easily use a custom field to pass the value. 1 On this post. And apparently this theme doesn’t support direct links to comments. About time I wrote my own theme . . .

TL;DR -First, go check out the Historic/Now Jackson Ward gallery. See the code for a Google SS backend on Github or get the jquery plugin. Read on for an attempt to detail the search and construction process. This is an attempt at ridiculous transparency regarding my search path and building process from start to finish. By the end, I’ll provide a working example of a pre/post slider for historical photographs using a Google Spreadsheet to hold the URLs. This post is overkill and will be painful for anyone not suffering from some condition which should be treated medically. The Search Friday, March 14, 10:30 (ish) PM I read Erin White’s1 THAT Camp proposal about capturing modern images to parallel VCU’s Jackson Ward collection. Eric Johnson’s comment about the Washington Post’s then/now slider got me wondering if I could figure out how that worked and set up something decent prior to Saturday’s sessions. cc licensed ( BY SA ) flickr photo shared by Tom Woodward The search graphic Search #1 – 10:40 PM – javascript slide between photographs I immediately start finding slide show focused pages. So I realize I’m not searching with the right words after about seven sites and around 60 seconds. Search #2 – 10:41 PM – washington post then and now I figure I’ll go see what […]