The Early Years
The Technology Ninja’s mother was a volcano and his father was an accountant from Belarus. His parents always had an explosive relationship and that drove him to leave home at the age of 1. He has wandered the world for centuries doing battle with all kinds of evil.

The Technology Ninja has no friends, no family and no college loans. He lives in a shadowy world full of danger, suspense, dramatic music, excessive sound effects and, of course, many, many, many differently colored ninjas.

How Technology became his Name-O (as opposed to Bingo)
Having defeated all his enemies, the ninja was growing bored. All ninjas need enemies after all. Finding no worthy foe he decided to conquer cyberspace and all the computers of the world.

He is winning, of course, but his quest continues to this day. Although many suspect he is simply taking his time so that he doesn’t have to retire and start playing bingo and shuffleboard. (It’s not that he’s against either diversion but I mean, come on, he’s a ninja.)

Stupid. I know. But I miss the kind of fun the technology ninja site represents and while not an appropriate persona for everyone it worked for me and for most of the kids at Byrd Middle School2.

I thought this site had been erased a while back but it turns out it wasn’t so I’ve imported it into the warm embrace of my personal WPMU install where it will hopefully live forever. It’s a good reminder for me that while I’m throwing all this work and time out on the Internet I’d better be saving and centralizing the stuff that matters to me or it will be gone forever. Lost or erased, it’s all the same.

The other general thing that struck me about the site was reading the comments. This site gave students a voice and I really did try to honestly answer their questions. When it comes to rules and management that seems to be a depressingly rare thing. It seems technology rules are often considered above explanation. I don’t know if the assumption is people can’t understand the rationale behind these rules because technology is sooooo complicated or that there isn’t much rationale behind these rules (guess which one I believe).

Answer people. Treat them with respect, explain things and you’ll have a very different conversation. Every time.

1 I’ve still got a full manga style cartoon based on this bio that a student drew for me that I’ll have to scan and post.

2 Granted, the cooler 8th graders no doubt found it lame but they weren’t really my core demographic anyway. I was the friend of the entering 6th grader and the kids who didn’t quite fit in. 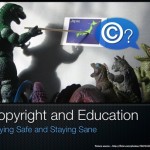 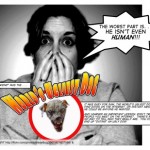 This would be a fun way to start off the school year. It’s similar to a number of things I’ve posted before but I liked these and the presentation is really nice. Ways I might twist it for the first days of school – maybe it’s just your summer in 6 words, your prediction of the school year in 6 words or you have to produce one for someone else in the class on whatever topic is chosen. Make sure you show good examples. Just another example of rules and being “inside the box” driving some really interesting content production. Hat tip – Jackie Gerstein