TextWorld – Microsoft ResearchMicrosoft TextWorld is an open-source, extensible engine that both generates and simulates text games. You can use it to train reinforcement learning (RL) agents to learn skills such as language understanding and grounding, combined with sequential decision making. A dev trained robots to generate “garbage” slot machine games—and made $50K | Ars Technicathe future race to the bottom for online courses Matthew Kay on Twitter: “There is a multiverse of possible ways data in a paper could have been transformed, analysed, or reported. Instead of a stale old PDF, what if you could change these options to inspect that multiverse? 2/7… https://t.co/8elOxgDpReally excited to announce our (Pierre Dragicevic, Yvonne Jansen, @abhsarma, me, @zirtech) paper on Explorable Multiverse Analyses. We make multiverse analyses (a la Steegen, @StatModeling, et al) interactive through explorable explanations (a la @worrydream).

Candace Jean Andersen on Twitter: “Hey Twitter I’m on a mission: The woman in this photo was an attendee at a 1971 International Conference on Biology of Whales. She is the only woman, & the only one captioned “not identified” in the article I found the p Pretty wild to watch this kind of research play out on Twitter. Temporary Autonomous Zone – Wikipedia It is composed of three sections, “Chaos: The Broadsheets of Ontological Anarchism,” “Communiques of the Association for Ontological Anarchy,” and “The Temporary Autonomous Zone.” –h/t Doug Belshaw MOSQUITO attack allows to exfiltrates data from Air-Gapped computers via leverage connected speakersSecurity Affairs Once again the team demonstrated that separating the computer networks from the Internet is not enough to protect them from attackers. In the past, the same group of researchers demonstrated that it possible to listen to private conversations by reversing headphones connected to a previously infected computer. The MOSQUITO technique establishes a covert ultrasonic transmission between two air-gapped computers using speaker-to-speaker communication. In Britain’s Playgrounds, ‘Bringing in Risk’ to Build Resilience – The New York Times — Ever feel like everything is just a stupid cycle of doom? Educators in Britain, after decades spent in a collective effort to minimize risk, are now, cautiously, getting into the business of providing it. Four years ago, for instance, teachers at […] 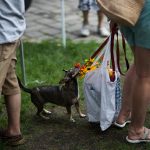