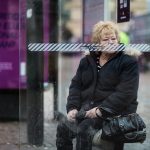 Not the best picture but I do love this fence construction technique. This photo op kept me pinned for quite a while so I figured my own capture was earned. From the Vasa museum which was really awesome. h/t Grant Potter for the suggestion.