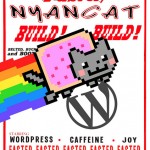 One of the moreMany? overlooked aspects of working with faculty around technology integration is speed- that is moving quickly from an idea/dream to working functional reality. Joy/playfulness is high on that list as well (and probably plays into speed) but I’ll focus on speed for the moment. It’s essential that working with a faculty development/ed tech group be the antithesis of the many monumentally lethargic interactions that characterize other institutional engagements. It ought to be agile. It has to be energizing. “If we have an idea, 10 minutes later we’re trying it out,” Mika says. “It’s like improv.” From a from an interesting WIRED article h/t to Enoch. I think that’s why WordPress has been so successful- it’s a flexible (but not overwhelming) platform that gets you 90% of the way to most destinations really quickly. It’s been interesting to see the possibilities around speed and flexibility keep moving. Talking to Tim Owens the other day about Sandstorm and the ability to spin up virtual just-about-everythings in the blink of an eye and maybe only for the moment. This is the opposite of the pattern of movement that has typically occurred in institutions. To that end, I’m playing with this NMC session description that focuses on the things we’ve been using to get things done quickly. A campy, meme-ified, high-speed […]

Man Stuck In Tree After Car Floods Gives Best Weather TV Interview Of All Time ““So I’m up about 20 feet in a tree right now,” he adds. “What?!” comes the response, which is weirdly enough what we’re all thinking. “What are you, what, uh, are you okay? How’s your energy, you’ve been there quite some time?” “Oh no, I’m fine,” Packer assures us. “Thankfully this is the nicest tree here. It’s a little cold, but I did Boy Scouts for 20 years, so I know how to keep my energy up and keep warm, so I’m doing fine.” “ tags: weekly weather interview exercism.io “Think deeply about how code can be improved. One particularly well-kept secret is that looking at someone’s code with an eye towards finding ways of improving it can teach you more about writing readable code than receiving feedback on your own code. Doing this forces you to think about why you make the trade-offs that you do, what in the code you are reacting to, why you are reacting to it, and how you might improve it. There is rarely only one good solution to a problem. Asking questions and articulating your thoughts about these small problems can change your thinking about the issues you face in the code bases you work in on a […]

The Tiny Team Taking on a Massive Reform of Government IT — Backchannel — Medium ““If I hear one more person tell me I can’t use New Relic,” he said. “I’ll punch them in the face.”” tags: weekly Do I Own My Domain If You Grade It? | EdSurge News “This past year, Davidson College introduced “A Domain of One’s Own” to a portion of the student body through faculty willing to use it in their teaching. I saw two styles of ‘Domains’ rise out of the initiative. The first type of ‘Domain’ took audience into account, considering the implications of public scholarship, representation, and student agency. The second, in many ways, mirrored the traditional pedagogical structure by assigning papers or short answer assignments to be posted online through blogs. This is not necessarily bad, but also doesn’t necessarily empower. The problems with the second approach can be wrapped up into two key questions beginning with: Why post an assignment online if…” tags: weekly domain grading audience Animate your way to glory “This article is significantly longer than previous installments. It features 4 interactive slideshows, each introducing a new tool as well as related concepts around it. In one way, it’s just another math guide, but going much deeper. In another, it’s a thesis on everything I know about animating. […]