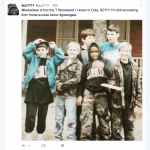 @twoodwar is this the T Woodward I I knew in Cola, SC?!?! I'm still recovering from those suicide kicks! #greengate pic.twitter.com/4HTaNHEi2N — auz1111 (@auz1111) April 7, 2017 That is me- back row, partially obscured (and not just by the camo). Pretty wild that John found me somehow and that we’re both involved in WordPress and web design stuff. It led me to look up another guy from that photo and a few seconds later . . . presto. He was even using that same picture as his avatar (because, as it turns out, they had a bet on who could find me on the Internets). Not world shaking but a fun connection to the past (30-ish years ago!) and one that inspired a bit of digital wandering. I’m relatively sure this is my house back in 5th/6th grade but I’m not entirely sure. I mainly identified it by the creek visible in the map view. I probably spent more time there than in the house. That’d definitely the pond where I used to fish and catch baby turtles (something of a family tradition now). I went to E.L. Wright M.S. before we moved to the hell that was 7th grade in Huntsville, Alabama’s creatively-named Huntsville Middle School.

Designing Journalism for Discovery and Engagement — The Local News Lab — Medium “Later in his commentary Ragusea touches on transparency: “just trust me I know what I’m talking about doesn’t work anymore, even if you are trustworthy and you do know what you’re talking about,” he says. “It’s like math problems in school: it is not enough to get the right answer you have to show your work.” Since at least 2011 in journalism developer circles show your work has been a mantra, and it is slowly spreading to other parts of the newsroom. Ragusea argues that Thompson’s idea of discovery is important not because “people enjoy watching their hero sleuth chase down a mystery” but because nobody will believe you anymore when you “report a bunch of facts, even if you explain where you got them from. You have to show how you got them.” Show, don’t tell. It’s writing 101 and it is the basic idea of active versus passive transparency. I like putting the emphasis on active transparency, in part, because it reinforces the idea of journalism as a process not a product.” tags: weekly journalism active tweet How to Protect Your Personal Data—and Humanity—From the Government – The Atlantic ” There are so many ghosts in our machines—their locations so hidden, their methods so ingenious, […] 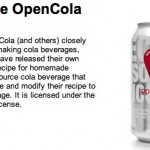