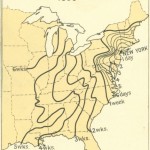 Travel Time/Time Travel One of those essential things history students (and teachers) need to keep coming back to. – via Flowing Data (which is good) via MNN (which I don’t like) who supposedly got the information from the 1932 Atlas of the Historical Geography of the United States which you can find here (although I haven’t found these maps yet). Hedges I never understood quite what was going on with hedges despite the fact that they’ve come up repeatedly in history courses and in literature. I just assumed they were dense rows of bushes. Now I know differently. Such a simple and effective way to build a fence. Din Minimum N0 = the critical number of guests above which each speaker will try overcome the background noise by raising his voice K = the average number of guests in each conversational group a = the average sound absorption coefficient of the room V = the room’s volume h = a properly weighted mean free path of a ray of sound d0 = the conventional minimum distance between speakers Sm = the minimum signal-to-noise ratio for the listeners This equation is supposed to determine “How many guests can attend a cocktail party before it becomes too noisy for conversation?” It would be fun to mess around with equation based answers to […]

Horseradish Quotes by Lemony Snicket ““Most schools have a loud system of loud bells, which startle the students and teachers at regular intervals and remind them that time is passing even more slowly than it seems.” ? Lemony Snicket, Horseradish: Bitter Truths You Can’t Avoid” tags: weekly quote snicket school Ruby, Ruby on Rails, and _why: The disappearance of one of the world’s most beloved computer programmers. “_why’s primer, the (poignant) Guide, was only a slight improvement. Dada or post-postmodern, is perhaps a more apt descriptor for the guide than poignant is. It starts with a cartoon of a cat, standing alongside an “elf and his pet ham.” The text opens with a note from _why saying he included an onion in the center of the guide. Why an onion? Because everyone will learn to write code so beautiful they will want to cry. “ tags: programming strange literature _why ruby weekly The death and life of great Internet cities “The sense that you were given some space on the Internet, and allowed to do anything you wanted to in that space, it’s completely gone from these new social sites,” said Scott. “Like prisoners, or livestock, or anybody locked in institution, I am sure the residents of these new places don’t even notice the walls anymore.” tags: internet cities community […]

Make Good Art: Neil Gaiman’s Advice on the Creative Life, Adapted by Design Legend Chip Kidd | Brain Pickings “When things get tough, this is what you should do: Make good art. I’m serious. Husband runs off with a politician — make good art. Leg crushed and then eaten by a mutated boa constrictor — make good art. IRS on your trail — make good art. Cat exploded — make good art. Someone on the Internet thinks what you’re doing is stupid or evil or it’s all been done before — make good art. Probably things will work out somehow, eventually time will take the sting away, and that doesn’t even matter. Do what only you can do best: Make good art. Make it on the bad days, make it on the good days, too. “ tags: weekly art ds106 advice neil Stalin was their drug: Tractor Drivers (1939) | Obskura “Tractor Drivers is a musical film. I simply love the fact that even the musical genre, always defined by escapism it offered to audiences, in the Soviet Union served propaganda purposes. If musical numbers in Hollywood musicals were usually just spectacular disruptions of storyline meant to entertain, in the Soviet musical they were ideological interludes, used to remind the viewer about his duties as a Soviet citizen. This crazy […]