McSweeney’s Internet Tendency: A Prayer for Lost Phones. ” Let us pray for those who lose their phones and therefore cannot follow character-restricted utterances regarding occurrences on far-flung fields of play. Let us pray, dear Lord, for those whose phones are not with them today, and yet they suffer phantom rings upon their thighs and fight temptation every fifteen minutes to check for electronic transmissions or blog updates regarding their favorite professional football teams.” http://t.co/E8Zom6AUEw A Prayer for Lost Phones McSweeny’s “they suffer phantom rings upon their thighs & fight temptation every 15 minutes” — Tom Woodward (@twoodwar) November 8, 2013 tags: IFTTT Twitter weekly prayer phones McSweeney’s The New Aesthetic — designedconflictterritories: betaknowledge: … ” If Google ever decides to put this feature to use, you may end up one day aiming your curled hands at some object, and Google Glass would know that you ‘like’ it. And this would only work on Google devices, because of the patent. What a world!” tags: weekly google like future CIA Realizes It’s Been Using Black Highlighters All These Years | The Onion – America’s Finest News Source tags: cia onion highlighter parody weekly WordPress › Broken Link Checker « WordPress Plugins From archive.org – please don’t ever do this by hand. WordPress › Broken Link Checker « WordPress Plugins http://t.co/NPjaUNf9df #hcpsitrt — Tom […] 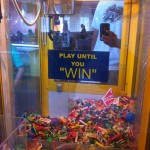 cc licensed ( BY SA ) flickr photo shared by Tom Woodward I wrote this in response to Gardner’s post here and in particular this quote from Thomas Merton that Gardner referenced. “[A publisher asked me to write something on ‘The Secret of Success,’ and I refused.] If I had a message to my contemporaries, I said, it was surely this: Be anything you like, be madmen, drunks, and bastards of every shape and form, but at all costs avoid one thing: success. … If you have learned only how to be a success, your life has probably been wasted. If a university concentrates on producing successful people, it is lamentably failing in its obligation to society and to the students themselves.” On reflection, this is a bit much for a comment (so now it’s a post) and probably somewhat hyperbolic but maybe it’ll spur some interesting conversation. My response certainly sounds like a keynote (not enough gray).I’m happy to take your money for saying ridiculous things. I can also claim I give homework so you’re kids will be like the responsible farm children of yore. Just send the checks. I read it more as an indictment of the definition of “success” in a corrupt/broken system as a kind of failure rather than advocating allowing for failure as a way […]