Welcome participants of VSTE Conference. If your looking for blogging resources connected with our presentation “Bob on Blogs,” you will find it here. Feel free to look around and comment while you’re visiting, and make sure you subscribe to or bookmark the blog. We update it several times a week.

—Another mock Chronicle article – it’s probably getting tiresome but it’s entertaining me right now. original article here by JEFFREY R. YOUNG footnotes, italics, scare quotes on blog and a few minor deletions by me . . . ____________________________________________________________________ The new head of Blackboard Inc.‘s course-management-software division, Ray Henderson, started a “blog” this week, and he’s already facing tough questions from critics. Blackboard’s top management wanted to know just what the hell this “blog” thing was and if there was a way to charge people extra for it. Eager to prove that he plans to bring change to Blackboard, Mr. Henderson declared that his “blog” is a sign of more transparent times. “Me joining the company means we’re going to communicate more often and more openly,” he wrote in his opening post on Tuesday. “We are even considering responding to phone calls from clients who pay less than $500,000 a year in fees.” “I’m excited about having a spot where I can muse out loud about my take on various things in eLearning, and have other folks weigh in with theirs,” he added. “In particular, I’ve got lots to say on the whole openness, standards, interoperability question. It’ll be particularly nice because if I talk about this stuff on company grounds I’ll be fired.” He allows comments on the blog, […] 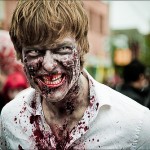 In honor of Halloween and returning from the blogging dead, I offer up this post (and so I have an excuse to use the picture above). I don’t blog much. Never have been consistent. The new job is making it easier to be worse. Lots of ready excuses. I recently found myself only looking through my FFFFound RSS feed and neglecting a lot of other things. It was easy to do. The education stuff made me nauseous and I’d never get to do the pop culture stuff that I liked, so why bother. In an attempt to remind myself of the things I like about the internet and education (and to remind myself to blog and share content intelligently) I made this aggregation site with the FeedWordPress plugin. It links in all my Delicious additions with a certain tag, my blog posts, and anything I star in Google Reader. So I’m not doing extra work (a tag here or there) but I am providing a single place/feed for a certain audience- in this case ITRTs who work in HCPSI don’t know that any will actually read it but stranger things have happened and having an audience in mind has always helped me.. This kind of aggregation has some real potential for schools and sharing resources that I’ve rarely seen harnessed. […]