Home > Reflections > What do you do?

What do you do? 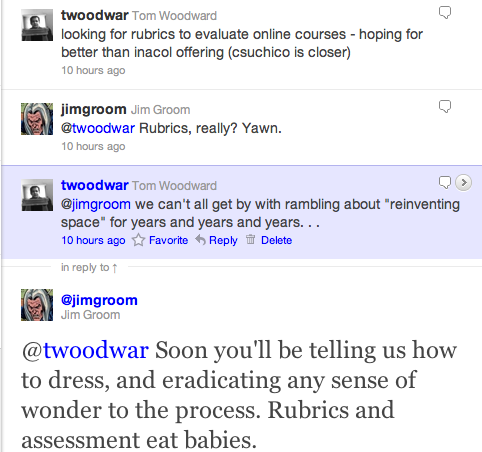 Maybe Jim’s right and I am eating babies1. I struggle quite a bit with a lot about this job. I didn’t think I was already at the baby eating stage but sometimes it’s hard to see from inside.

I often wonder where guiding becomes restricting. I am unsure how tools of reflection become tools of assessment and then evolve into dogma. It happens though.

My goal is to construct things that help people think about what they are doing and why they are doing it. The reality seems to be that many people need some scaffolding to do that. There are a variety of reasons for that. I think in some cases it’s just a way of providing some shoulders to stand on, not necessarily the shoulders of giants but a least a boost above starting from scratch.

I don’t believe that roots out creativity or individualism unless it’s done incredibly wrong (which often happens) but that’s an application of formula, of recipes, instead of an attempt to create reflection and conversation around pedagogy and concepts. I think the latter can be done but it’s much easier to do the former. To dictate that a course will contain X, Y and Z- always. And that those structural components somehow create worth and quality. I believe that path leads to stagnation and death. It creates a thin ice of believable competency. Underneath that ice lurks a lot of dark, cold water. I feel the same way about a lot of edtech stuff. It creates just enough of a veneer to allow people to mislead themselves that what they are seeing is far better than what it is. IWBs often being a prime example. I believe we are at a time and place where scale and speed matters. It is not a good time to be a public school teacher.

Maybe I’m being melodramatic but I’ve talked to quite a few education vendors. They aren’t laying people off. They aren’t cutting salaries. Business is great. Educational consultants are hiring. BlackBoard is on a buying spree and Pearson is teaming up with Florida Virtual School. For profit charter schools are riding a wave of media2 into the hearts and minds of America. It’s a great time to be an education vendor.

Meanwhile, pupil-teacher ratios are rising, salaries are frozen, teachers are laid off. Public opinion of the profession and the institution is low. Gallup has education being of greater concern to Americans than war, immigration and lack of money. Seriously.

We have to turn the corner here and I believe we have to do it with speed.

1 The saddest part of that quote is that it was mine and originally used against Barney (the purple dinosaur, not the sheriff guy.

2 An Oscar? Seriously, for an infomercial?

I think about where we spend our money. We’re constantly trying to find easy ways out of holes, easy ways to scale metaphorical mountains. We look for processes to remove the chores of thought and decision. Education is floundering. We lost our faith in teachers. It is every politician’s easy drum to beat- after all. “Our schools are failing! The enemies are at the gate!”Don’t actually go to this site. I just liked that it was a warning site given the url. Who would argue that our kids don’t deserve better? Both parties agree. Education is failing. Our solution is not to work, to spend money and time on our teachers, to help them become better, instead we send our money away, spending precious time testing products of a system we insist is broken. We buy software. We buy content. We buy external experts.Guilty of being bought and sold. We buy reputation. We buy “trust” and “quality” because we don’t believe either really exists in our schools. Invest that money in our teachers, on smaller classes, on things that have been proven to matter. Make teaching a career that isn’t based on martyrdom. Martyrs die flaming deaths. Systems based on them don’t last. There are no easy answers. You can’t buy, process, software, magic your way out of this. There […]

The Knight Rider gif has nothing to do with this post but it might make you feel better. If you’re here from #ds106, that image is for you, the post is likely to be depressing although it does at least reference Gardner’s digital facelift talk. What passes for deep thoughts on this blog Here’s my fairly simple idea. School systems are paying corporations/speakers/consultants millions in the hope of finding short term, instantaneous solutions – essentially elements of the digital faceliftAlthough this includes reading programs, magical consultants and all kinds of non-digital “solutions.”. That money should go toward improving teachers, building internal capacity, and creating teacher evangelists for concepts and tools. Instead we keep trying to buy shortcuts. We end up with tools/programs teachers don’t want and which many teachers don’t use. We end up paying companies to develop the expertise of their employees while our own employees lack funding for professional development. What if we stopped paying for cheap, easy fixes? Take Discovery Learning’s 150,000 “learning objects” for instance. Most teachers only use a tiny, tiny fraction of those videos. What if we just paid people to find videos on the web and tag them in a way that makes them accessible? If that fails, what if we paid teachers to make the videos that were needed? I know the […]