In most English classes the teacher chooses all of the content in addition to all of the assignments. In some classes you’ll get to choose between a few books, assignments, or essay topics that the teacher has provided. The projects tend to tier upward in terms of sophistication and/or length.1 There is essentially one broad common experience for everyone and virtually every structural element originates with the teacher. The student ability to alter the class is limited to asking questions. That leads to a fairly predictable experience built to produce similar products which are easier to compare to one another.

English, in particular, seems to beg for a different paradigm for course participation/creation. I talked some about the mechanism for infusing student selected media into a course in the previous post, so I’m doing this backwards to some degree. The lower portion of the image above is a rough conceptualization of what the course itself might come to look like as compared to a traditional course (the upper portion of the image).

A chunk of this is colored by how I’ve seen elements of #ds106 play out. I have always loved the idea that participants can submit project ideas. Linking those ideas to the student work created based on them makes it far more powerful and interesting for everyone. It also substantially changes the locus of control for the course. Cory Doctrow recently had something similar happening in an English class using his novel Little Brother as basis for songs, fan fiction extension chapters, and alternate chapter extensions. Doctrow goes out of his way to make this possible with his CC licensing and general enthusiasm for fans interacting with his work.

Will you have to think through quality control? Sure but it’s worth considering how you can integrate that into the course by infusing an understanding of standards based grading and guiding the alignment of projects to that concept. I’d look at quality control here as a problem I’d want to have as it opens a number conversations that should be valuable and should further the goals of the class.

The other portion of DS106 that I found particularly interesting was the progressive extension and remixing of participant created projects. The idea that other students would look at something you did and find it inspiring enough to make them take action (create a similar work, remix it, create something new). An example of that chain that mattered to me in ds106 was when I watched No More Digital Facelifts. I believe the assignment was to reflect on the talk in a blog post. I was interested enough in the language and poetic elements of Gardner’s talk that I opted remix it over Nas’s If I Ruled the World. You can see all kinds of responses to that post. That was empowering to me in a variety of ways and it made me reconsider exactly what role I might play in this course and how my actions might create ripples or waves greater in size than the originating force. There is an audience and what I do can have power.

Clearly, none of this is rocket science and none of it is a promise of instant engagement and success. In many ways it creates different problems than the traditional class but the problems are more interesting to me. Breaking students out of the consumption mindset will be a fairly difficult task by itself.

In the end, I see little choice in our current landscape. Either teachers start actively harnessing and successfully promoting the interesting human elements of differentiation and relationships or they’ll be replaced by the mechanical versions. I know “A computer never hugged anyone.” but a human shaped pillow could and a low-paid child supervisor endorsed in hugs probably already is. Teachers seem to be making the wrong arguments and thinking of the past as a far more solid foundation for the future than it seems to be, especially given the PR arrayed against the institution.

1 These two things are often conflated.

Apparently, I really like the idea cutting down communication to it’s purest form. (that’s really pompous sounding)- I like short writing. I like the idea that you have to pack as much as possible in just a few words. Boing Boing has come through again by finding a book dealing with 6 word memoirs by a variety of writers. My two favorites are below. Yes, you can edit my biography. — Jimmy Wales Must remember: people, gadgets. That order. — Brian Lam I might simplify the idea for students and make them obituaries- it also avoids any of their work getting sucked into the Oprah memoir furor (nothing worse than having to apologize to Oprah on national TV). Give them bonus points for working in vocabulary words etc. Here a more academic example that I took a shot at (I listened to this Tesla podcast recently- interesting stuff). Eccentric Serb electrifies science. Dies poor. — Nikolai Tesla I guess it all boils down to- well, boiling things down. There’s a lot of processing and thinking that goes into trying to sum up a life or period in just a few words. In the end it’ll help everyone. Have them vote on the best sentence. Post them individually in a blog and install the star rating plugin. Make your life painless […] 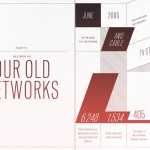 I wandered into the The Pirate’s Dilemma keynote video the other day and found it pretty interesting. It’s worth watching if you’ve got some time. There’s also an accompanying book and blog. I subscribed to the blog and got an interesting bonus recently. Nicholas Felton ( of dy/dan fame) worked with Matt Mason (Pirate’s Dilemma author) as part of the We Tell Stories series. My brief was to come up with something based Hard Times, the Dickens classic which illustrates the growing pains of the industrial revolution. My story was to be about the growing pains of the information revolution, the subject covered in The Pirate’s Dilemma. If that wasn’t an intimidating enough way to enter the world of fiction for the first time, the story also had to be told as an ‘info-graphic novel’, using mostly statistics and numbers, mirroring Mr Thomas Gradgrind’s (the main character in Hard Times) obsession with cold hard facts. He didn’t quite follow those directions but I like what he came up with. It takes some focus to really appreciate it (or understand it in some cases) but I think that’s a good thing. We Tell Stories is an interesting project with 6 authors telling 6 stories in interesting ways. There’s a lot of variety and some interesting things to think about in terms […]