#thoughtvectors is in full effect with 108 blogs and serving up 370+ posts. Not bad at all for 24hrs in.

Here are a few of the more interestingly named blogs so far and the associations they triggered for me. Stop by and visit one or wander further astray with my associative trails. 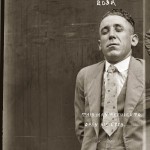 This Man Refused to Open His Eyes & Other Web Flotsam

This picture has been default online photograph on a number of services for a while now. Recently a number of people have asked about it. It’s a mugshot from 1920’s Australia. I saw it a good while back. I can’t recall where but there’s something in the futile defiance that has remained interesting to me.   There is a pretty decent way to see the reality of the world of online education by searching Twitter. There will be cursing, plenty of cursing.     The Internet of things is well on it’s way to reality. Hello NewThermostat.     Targeted ads end up doing odd things when you mostly go to Amazon as a result of Boing Boing articles rather than to shop.     Someone somewhere was paid to write this ad copy. English teachers everywhere ought to post it on their walls.     The VADOE is full of malware. You have been warned.

Mapping #Ferguson | Mapbox “In particular, we wanted to see if there was any difference between tweets from locals and those from people who traveled to Ferguson to participate in or report on the protests.” tags: mapping ferguson twitter data sociology weekly map dataviz tweet The town that runs on Twitter: Jun’s residents tweet to report crime and chat to their mayor – Features – Gadgets and Tech – The Independent “Jun, home to 3,500 people, is believed to be the first town worldwide to adopt Twitter as the dominant method of communication between local government and residents. For the past four years, it has acted as the town’s community noticeboard: sharing obituaries, news, school-dinner menus. Residents use the social-networking site to report crime, problems with civic services and to book doctors’ appointments.” tags: weekly twitter communication government socialmedia Want to Make Your Course ‘Gameful’? A Michigan Professor’s Tool Could Help – Wired Campus – Blogs – The Chronicle of Higher Education It’s a bit insane to me this was a conversation but it’s one that ought to happen much more. Are we practicing what we preach? “One of my undergrads came up to me and said, ‘You know, Professor, your ideas about games as models for learning environments are really interesting, but I’m curious, why don’t you teach your […]

What You Need to Know About Yik Yak, an App Causing Trouble on Campuses – Technology – The Chronicle of Higher Education “They envisioned it, they said, as a tool for observational campus comedy. Mr. Buffington argues that making all comments anonymous is critical to maintaining users’ privacy, encourages less-inhibited commentary, and allows the best posts to rise to the top. “It allows you to talk about certain topics you can’t talk about on Facebook,” Mr. Buffington said. “Your mom or teacher is on Twitter or Facebook. This is a more open discussion.”” tags: weekly socialmedia privacy anonymous symptom I’m the Yemeni kid from the article about the NSA in HCS. It’s basically my fault they became hawks in monitoring internet use in the student body. AMA. : HuntsvilleAlabama “It didn’t occur over Facebook, in a group, it occurred on Twitter. The “group” he’d always refer to were my Twitter followers. He really didn’t get it. I was not an A student. I was an A/B student with the occasional C. The emails with the pictures of my tweets sent to the school, the ones they used to show me, were from a specific organization that I was told was an NSA affiliate later on, but I can’t recall the name. The knife was a broken renaissance fair dagger. The […]