I saw this poster in a library the other day and it made me queasy. I like books. I like libraries. I dislike zealots and this kind of garbage.

This poster is the kind of reactionary propaganda that does no one any good. The opening quote is below.

Libraries are icons of our cultural intellect, totems to the totality of knowledge. To claim, as some now do, that the Internet is making libraries obsolete is as silly as saying shoes have made feet unnecessary.

Wow. Icons and totality. He almost makes Internet zealots seem reasonable. To claim that there can ever be a “totality of knowledge” is egotistical and to claim the library somehow embodies “totality” is absurd. Libraries, by their very nature, have to exclude huge amounts of information and make editorial decisions regarding content inclusion. There’s plenty of good and plenty of bad in that.

To use the feet/shoes metaphor is equally misguided. Libraries and the internet aren’t comparable to feet and shoes. That would seem to indicate that a library is an organic component of a society, like feet are a part of the body and the Internet is an add-on whose main purpose is to protect, or possibly enhance, the library. Neither is the case.

I will say that the Internet is making the old idea of libraries obsolete. The Internet is forcing libraries to change and focus on what they offer that is beyond content repository. Libraries ought to be (and many are) incorporating the Internet and all it has to offer. Libraries are useful and good but not for the reasons outlined in this poster.

Suitable for framing, blog badges and t-shirtsDon’t you dare put this on a coffee mug. That totally violates the terms of use.. Wear it proudly and let people know you’re preparing kids for the workforce of tomorrowLife. So. Full. Of. Irony.! If you do not realize this is a joke or you appreciate this image in ANY way, I cannot help you. Grab the code!!!! 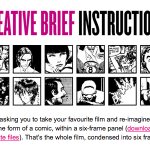