Who says Jaiku is useless? It’s just another tool and it makes possible some quick connections that lead to bigger things. Connections are good- no matter how trivial they might seem.

Last night I noticed Basler bookmarked the same water balloon catapult I did. I mentioned that in a comment. He responded with a flickr link to a water balloon launcher they made for physics last year and then I found the picture above, in which students took a photo and then explained the physics demonstrated by each picture (description below). What a cool idea and it seems to be part of a larger AAPT photo contest.

It shows the period of time during which a ball was compressed against the ground after being thrown towards it. During the period of time which the ball is compressing on the ground, the ball’s kinetic energy is transferred into elastic potential energy. The ball is also dissipating some of its energy which results in the ball not bouncing back to its original height. 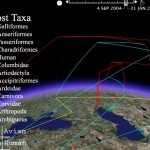 A hodgepodge of links that inspired me and rough ideas on how I’d use them in class. Wondermarkvia boingboing What is it? It’s a poster that lets you build your own story by picking component pieces- think MadLibs but for story construction. What I’d do with it- This would be a really interesting culminating activity after studying a genera, author, poet or historical era. The students have to figure out the basic elements that are present in the author’s works or major people/conflicts/geography of the era. They then build a similar poster. It’d be hard to figure out which elements would be the variables and which would be consistent. Lots of thinking involved. Thinking about it, it might be a fun thing to build in Google forms using the new branching options. The Shadowfound via superpunch What is it? An artist who’s envisioning a boy with a monstrous shadow. What I’d do with it- It’d be fun to depict the inner-selves of historical and literary figures as their shadows. So you’d have students analyzing the characters or historical figures and then drawing representative shadows. The key would be in how they explain what the shadow represents and how they explain the difference between the public persona and the inner-self. It could represent their hidden dark side, kind of like what […] 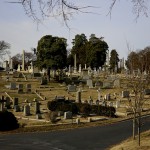 I’m pretty excited about a new project we’ll be working on this year. We’re going to look at a local historically significant, but still active, cemetery through a variety of disciplinary lenses. Hollywood Cemetery is the permanent home of two presidents of the USA (James Monroe and John Tyler) and one president of the CSA as well as a variety of other interesting local people. Dr. Ryan Smith from VCU’s history department has already had students doing quite a bit of work with local cemeteries. Back Story also recently republished a podcast (Grave Matters) which mentions Hollywood cemetery quite a bit and is all kinds of good. Even the Girl Scouts have some great information on Hollywood CemeteryWarning- Word document. So that brings up the question- What can we do that hasn’t been done and how can we make this something really valuable to the community- both locally and at large? The Players and Their Lenses Looking through the lens of sociology, Dr. Susan Bodnar-Deren will be helping us think through work around mortality, social status etc. by analyzing the data from gravestones.Already, I feel the need for better vocabulary. Grave marker maybe? Dr. Bernard Means will be bringing an archaeologicalHis Death and Burial course sounds pretty awesome. and 3D imaging backgroundIncorporating these types of files has led to all […]