Our Focused Inquiry people are building an online resource for first-year students. One of the things they wanted to do was to put a bunch of concepts in collapsible divs and be able to use a URL to link to a particular expanded div. The initial plugin they were using for collapsible divs didn’t allow/create IDs but moving to the Bootstraps 3 Shortcodes plugin go the IDs we needed. After that it was just a matter of adding a bit of jQuery to a plugin. I gave myself a head start with this post on Stackoverflow.

I hadn’t known about the location.hash option previously. It is worth noting that if you don’t lead with window it will work in Chrome but not in FireFox or Safari.

You can get the URL to trigger the div by copying/pasting the URL when you hover over the title on the completed element on the published post/page.

There are always little things waiting for you. In this case, having auto generated div IDs results in issues if the order of the elements changes. The stuff still works, it just links to a different item. This would have been a bad thing to figure out further down the road so I’m glad it came up early. There is something to be said for working prototypes.

The end result is I’m just going to write a small plugin that’ll allow us to manually set the ID. It maybe that this whole thing becomes a more structured process using custom fields of some sort.

This URL https://bionicteaching.com/wp-json/wp/v2/posts/?filter[orderby]=rand&per_page=1 gets you one random post via the WP JSON Rest API v 2. It is not the most well documented thing so this might help someone.
Here is a gist that’ll take that and display it.

I’m going to be co-teaching a digital humanities class and I started playing with the theme a bit.

I thought it’d be fun if I could show a random map area in the header on each page load. I wanted to play around with Leaflet js as well because it has a number of interesting options.

The javascript to generate the map ends up looking like this.

The header portion for the theme is just a full-width bootstrap div with the id ‘header-image’. 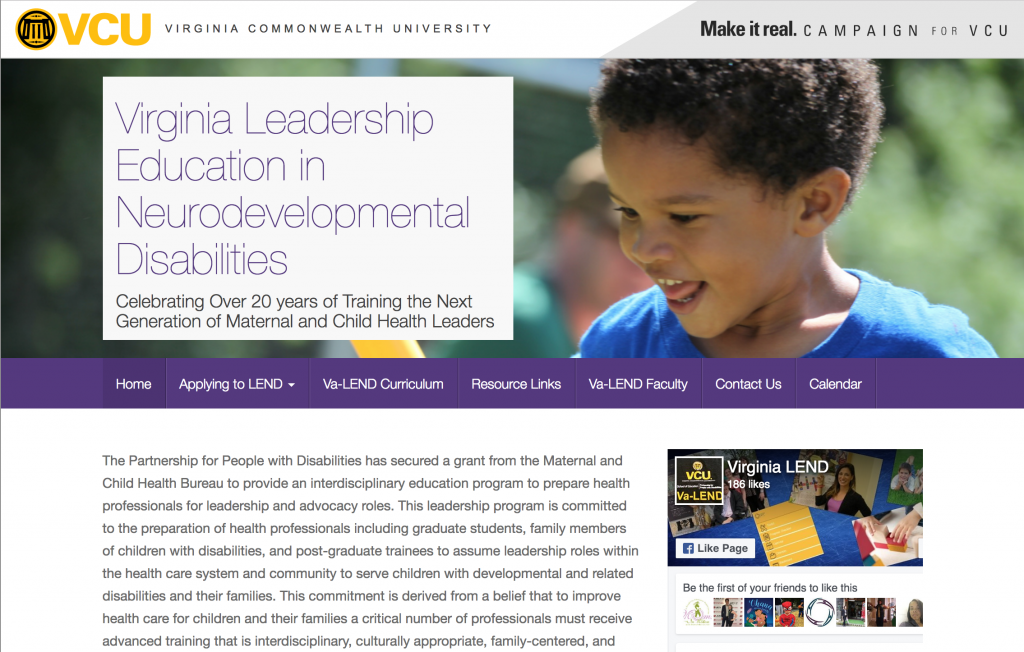 I did a quick makeover/customization for a VA LEND site.

I adjusted the title, dropped in a background image, and added posts to the static front page.

I also ended up writing a little plugin to load the VCU brand bar. The new bar is a dramatic improvement although I remain puzzled by the power branding people have over everyone in the university.

I added the Facebook page embed. I’m actually not sure how this is supposed to be done as I don’t spend much time in FB land. Whichever path I chose seemed way too high powered for what it was worth and involved my API access . . .

I found a css animation library a while back that I’d been meaning to try out.1

I added the CSS to my personal site on the front page and to the Digital History page. It was super easy and did what I wanted.

All you do is add animated and the animation of your choice to an element and you’re up and running.

Even if it’s played out . . . I still like it and my next attempt will be to adjust the animation a bit so that multiple elements load in a staggered fashion.

This was harder to do initially than I thought it would be. It’ll end up with a full post when I finish it all up.

I was briefly trapped in a scenario where one person was relaying their opinion about a website through another person. This is a bad scenario.

It is made even worse when done over email.

Almost inevitably it will be an absent supervisor and the person they have bestowed the website duties upon. With faculty, it will be a GA or other student worker but it happens in other areas as well.

It is a recipe for slow progress, many re-do’s, and general unhappiness for all involved.

Resist involvement in this scenario whenever possible.

1 The creator’s homepage trips me out although I thought he could be kinder in his source view.

This Is Almost Certainly James Comey’s Twitter Account Click through to the linked photo, and you’ll find that a well-wisher has left a comment in which none other than Brien Comey is tagged. Now, our FBI Director has trained his son well. His Instagram account is locked down. Instagram itself, however, offers a little loophole that is terrible for user privacy but wonderfully helpful for our purposes today. Are you searching for stolen US University email credentials? Search on the Dark WebSecurity Affairs Virginia Tech makes the list . . . “I’ve been scraping the Dark Web since 2009. There were 2.2 million .edu [emails] there back in 2015, 2.8 million in 2016, and now almost 14 million a year later. That’s a significant spike,” explained Brian Dunn, managing partner at ID Agent. There are people who spend their time yelling at the Mars Curiosity rover on Twitter | The Outline Despite all this, not everyone believes that Curiosity is actually on Mars. There is a not-insignificant number of people who yell at the Mars Curiosity rover on Twitter, accusing it of perpetuating a hoax. Education secretary criticizes professors as telling students ‘what to think’ “The faculty, from adjunct professors to deans, tell you what to do, what to say, and more ominously, what to think.” COTSBot – Robotics@QUT – Confluence […]

Nadine Batchelor-Hunt | ???? ?????? on Twitter: “I just found out that “abracadabra” comes from Aramaic meaning ‘I create like the word’ (‘???? ?????’), and from the Hebrew for “I create as I speak” – and this is definit Customers aren’t satisfied with virtual college — Joanne JacobsIn addition, regulations keep lower-cost alternatives out of the market. To gain eligibility for federal financial aid, innovative programs must be accredited, writes Akers. They are “judged based on how they educate students (e.g., curriculum, faculty, manner of instruction) rather than on the outcomes they produce.” She proposes creating a pay-for-performance system that looks at outputs, such as first-year earnings and student loan repayment rates. — it’s almost like we can’t understand how this would also create really terrible results in the long run. xkcd: Synonym DateThe perfect English challenge. Stephanie McCarter on Twitter: “The masks I’m making for my Vergil students. https://t.co/xLEmeQGo6B” / Twitter Two.js: ExamplesTwo.js is a two-dimensional drawing api geared towards modern web browsers. It is renderer agnostic enabling the same api to draw in multiple contexts: svg, canvas, and webgl. Survivalism – WikipediaGet your terms right for the coming SHTF. 30 Completely Unrelated Movies Described In One Sentence That Perfectly Fits Them Both | Bored PandaFeels like a useful prompt. Scientific Illustration | Julia Moore Illustration | United StatesA […]

apache/incubator-superset: Apache Superset (incubating) is a modern, enterprise-ready business intelligence web application h/t Downes Plotting the Course Through Charted Waters Heat maps, stacked area plots, mosaic plots, choropleths – oh my! There are so many different ways to visually convey relationships and patterns in data! In this workshop on data visualization literacy, you’ll learn to recognize many popular types of charts and how to glean insights from them. The Appendix contains some examples of data visualization as visual essays and it also includes links to resources for learning how to create your own. About Frankenbook Frankenbook is a collective reading and collaborative annotation experience of the original 1818 text of Frankenstein; or, The Modern Prometheus, by Mary Wollstonecraft Shelley. The project launched in January 2018, as part of Arizona State University’s celebration of the novel’s 200th anniversary. Even two centuries later, Shelley’s modern myth continues to shape the way people imagine science, technology, and their moral consequences. Frankenbook gives readers the opportunity to trace the scientific, technological, political, and ethical dimensions of the novel, and to learn more about its historical context and enduring legacy. Do It Yourself – Futility Closet Society of Mutual Autopsy (Société d’autopsie mutuelle), founded in 1876 “for the purpose of furnishing to the investigations of medicists brains superior to those of the common people.”