I don't know the terms cMOOC and xMOOC. Can you send info? @mark_mcguire @jadedid @vahidm

The language around MOOCs is confusing, even for the people involved.1 For the record, the whole conversation is here and Cathy later indicates she knows the difference.2 Anyway, I did see it as a positive sign that Cathy Davidson was willing to engage in that kind of open conversation and she gets bonus points in my book for commenting on Alan’s blog a while back.3

I attempted to draw out some of the conceptual differences I saw between traditional courses (xMOOC) and courses which use the community in ways that matter (c-ish4 MOOC). 1 h/t to Jon Becker for passing the tweet on to me.

2 Although I’d disagree with commercial vs connectivist delineation. It seems to assume that profit, rather than instructional design, is the delineator.

3 It was good that no one LMGTFY’ed her. Who says the Internet is rude?

4 I think a full on cMOOC would be closer to Dave Cormier’s Rhizomatic course but I think many people want the expert playing a more dominate role in the process. I don’t know if that’s because that’s what they’re used to or if there’s a deeper need to feel like someone knows the answers. 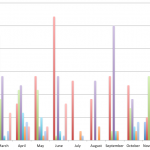 I wondered about my blogging patterns given my recent increase in posts. I didn’t bother pulling out Jim Coe’s posts from back when this was a joint blog but the data is good enough for my purpose. Anyway, I started messing with it and am working towards a visual way to represent it in a way that makes sense to me. I’m totally unhappy with this graph. Totally. I messed with some color pallets etc. but it just didn’t do what I wanted at all. I then went to the opposite end of the spectrum and wanted to see what sparklines might show me. Sparklines are a favorite of Edward Tufte who is on the super minimalist side of the data visualization spectrum.There’s probably a happier middle ground but he has a number of good points. If you’re in HCPS and interested in checking out some of his books let me know and I’ll bring them in. At first I didn’t think there was enough data to make the sparklines work. I then tried compressing the horizontal axis and it improved things but it’s still not what I want. Here’s another stacked year graph that I might work on some more. I ended up wandering into Adobe Illustrator and found out there are some interesting tricks for making graphs in […]

We have 668 high school teachers using at least .1 MB on a shared network volumes we’ve collectively dubbed “Virtual Share.” Those 668 high school teachers use 2019.7 GB or 2.02 terabytes of storage. What’s particularly interesting to me is the disproportionate usage between teachers. The top user, a single person, uses 180 GB or roughly 17% of the total.No judgements on quality of use, just amazement that they are so far out there. The top 10 users use 733.2 GB of storage. The top 20 users use 993.6 GB of storage or almost 50% of the storage is used by roughly 3% of the users.Makes me reconsider the whole 1% thing as even more screwed up. These are just embeds of the data from Google Spreadsheets. Nothing fancy, not much control but I think it does paint a decent picture of the extreme differences in resource usage. I do continue to have trouble with the interactive chart embeds outside of the spreadsheet. I do like the unintentional psychedelic effect on the pie chart. 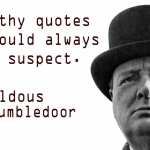 I have always been rather irritatedIrrationally? Maybe. by the quote attributed to Alvin Toeffler. It was used in the start of the History and Future of (Mostly) Higher Education MOOC. The participants are all supposed to be life long unlearners. Cute, pithy, tweetable but I fundamentally disagree with what the words mean. First, the quote- The illiterate of the 21st century will not be those who cannot read and write, but those who cannot learn, unlearn, and relearn. I went wandering to find more about Toeffler and the quote. Know thy enemyI attribute this quote to Lee Cipolla. and all that. The book most often associated with the quote is Future Shock. I find only two uses of the word “illiterate” in Future Shock. I also found a full PDF copy online that returned the same information. I won’t link to it here but you could find it without much issue. I’m amazed what I find by adding filetype:pdf to my Google searches. Anyway, the quote below seems to be the relevant one and it turns out I’m not the first to wander down this path. He does quote Gerjuoy who says something close, but better and harder to quote. Psychologist Herbert Gerjuoy of the Human Resources Research Organization phrases it simply: “The new education must teach the individual how […]