This is a pretty specific thing but the concepts ought to be broadly applicable and interesting for the 3 to 5 people who will end up reading this. It’s a fairly amusing blend of less standard Google Functions and a bit of Google Script to do something fairly decent that had been quite a bit of hassle to do previously.

We have Social Work students who are assigned to various supervisor/liaison people. There are a lot of students. We wanted students to be able to submit a form to Google Drive and we’d keep track of all this and show only the relevant data to the various supervisors.

Setting up a form that requires you to be logged in and accepts files is now very easy in Google Forms. It also remains easy to log that information to a spreadsheet associated with the form.

The student email address became the unique ID that would allow us to tie the form submission to the list of students and their programs, liaisons etc. Now we needed a formula to link these two sheets via email. I started with =VLOOKUP but that would have required the student email to be the leftmost column in the data and that would be awkward for other things. After some banging around and general bad attitude on my part I found =MATCH. MATCH doesn’t care about the order and returns the row where the match occurs. That formula =MATCH(H2,’Form Responses 1′!D:D,0) let me build a few others to pull in what I wanted like this =INDIRECT(“‘Form Responses 1’!A”&I2). Note that to use other cell values as variables in other cell functions you need to use =INDIRECT. This ended up getting me the time of submission for the file and a link to the file.

Next up I needed to create views for 24 different people who were associated with various students. To get this I used the =UNIQUE function on the column holding their names. I didn’t want to do this by hand because I don’t like to do boring things. I also needed to figure out the function that would pull in the correct data from the combined sheet and prevent people from accidentally messing up that function.

The formula ended up being a combination of =IMPORTRANGE and =QUERY. The following function did the trick.

Now I needed to create a spreadsheet for each person, name it, set cell A1 to be that function, protect it, and then put all the spreadsheets in the same folder.

Now we just needed to run all this through an array containing the names of the supervisor people.

And presto, a whole bunch of files that do what we want. The one hassle is that it seems you have to approve the =IMPORTRANGE function by hand from the created sheet. 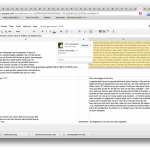 Making shareable (Sharing with a single person or specific group but not with the world.) comments on public writing is a fairly awkward spaaaaaace right now. There are things like AnnotateIt and Awesome Screenshot and the annotations in Diigo. So I’m looking around for other free options and brain storming odd ideas and not find a whole lot and I came up with the following . . . Note: I’m not saying this is a good idea, it may even be a bad idea but it might inspire someone to do something more interesting down the line.I think it makes a nice cheat to be able to analyze text from an RSS feed using more commonly held SS skills. There are a few other things I’m kicking around in my head as well. I at least found it mildly amusing. Here’s how you might pull an author feed from WordPress into Google Spreadsheets with separate cells each paragraph (for paragraph level commenting). The idea being that you can share the Google document with just that student and do the commenting via the GSS commenting feature. Google spreadsheets will import lots of things (xml, atom, rss). WordPress provides lots of specific feeds (author, tag, categories, combinations thereof). So step one is to get the author feed – for example http://rampages.us/fren330/author/sheehantm/feed/. You […] 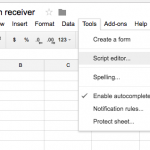 Sometimes the options given in Google Forms just won’t quite work for what you want to do. Maybe you want a particular look, or an interaction, or whatever that Google Forms just won’t do. Luckily, it’s not too hard to make a custom form that can do whatever you want and still has the ability to write the submitted data to a Google Spreadsheet and the form HTML is still served by Google. The following steps should get you up and running and comments in the scripts should provide additional details. Make a new spreadsheet in Google Sheets. Go to Tools>Script Editor Select all that stuff and replace it with the content below. Replace the string of ****** with the ID of your spreadsheet. Then save it. If you get any permissions prompts approve them. Make a new HTML page (File>New>HTML File) and name it index.html Select all and replace it with this.This is as parsed down as I could get it so it’s easier to understand (I hope). Save it. To make sure things work, let’s publish it (Publish>Deploy as Web App). Now go to that URL and submit something and see if it goes to the spreadsheet. If so, great. Now you can start customizing the form to reflect your needs. This form should now write to a […]

The Context Middlebury has an interesting setup. They call them Go Links. It’s basically a version of tinyURL that anyone at Middlebury (students included) can use to make customized Middlebury links. If you’re on campus, you can use go/whatever and off-campus you have to use go.middlebury.edu/whatever.Probably works on VPN but I’ve never tried and don’t care enough to do it right now. I’ve got a blog post to write. This replaced a giant redirect list. I’m not sure how I feel about it. In some ways it’s kind of fun and useful but it feels like it creates considerable technicalmaybe just management debt? but if it’s created by tech . . . debt in the long run. It also habituates people to getting to things in ways that require rethinking outside of the campus network. I also don’t know how you end up removing these when the students graduate or when the usage dies out. I guess you’d do something around tracking usage and auto-deleting after a certain period of inactivity. Otherwise this just grows forever. I don’t think you want this chart to keep going up. There are currently 1,144 entries that start with C. That includes links like critical-conversation, critical-conversations, criticalconversation, criticalconversations . . . so you can see how this plays out. I found the statement below […]