This project was inspired by a Sklar brothers bit that I heard on the VA Beach AM comedy channel the other day. An edited and condensed version of track 16 is here.

Take any video.1 Add your voice over as if you were a local TV news anchor attempting to provide color commentary without stating anything as a fact or with certainty. Add all the hedge words and banalities that exemplify this kind of coverage.

The basic idea is this is almost the opposite of what we want students to do with writing. We want them to be specific, to eliminate hedge words, to make a strong argument, and to take a specific stance. In a class, I might flip it both ways. Have one understated version with no definite statements and then do another version which overstates things (like this Daily Show clip description which I may dig up the video for at some point). Or you could simply give them the option to either understate or overstate the commentary.

This is a quick and dirty example where despite my efforts I accidentally say a few facts. For instance, there’s no way I could really know that humanoid is small, nor that the utensil is plastic. Allowing for an editing cycle based on other people calling out facts might be possible depending on time.

1 The worse the video, the easier this is. Look for something with virtually no action. If it’s exciting, you’ll never keep up. 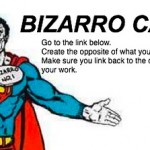 This is kind of what I’m thinking of for #ds106. I’d like participants to have a random selection of these cards and play them in the comments. They’d embed the image in a comment on someone’s blog and link to the post they’d like to see them act on (flip in this case). I think it’d add an interesting element of randomness and participation. I also want the cards to be open to interpretation. “Create the opposite” is a fairly wide open. It could mean opposite media type (motion vs still, text vs image etc.) or opposite theme, or any number of other opposites. I’m curious if others think this is feasible/interesting. Preferably, I’d like it to be both. Here are a few other possibilities. For what it’s worth, I think this could be a really interesting thing to do in k12 classes. You could give out these cards with assignments as well. Imagine assigning the topic and having students giving out the assignments, or choosing from their own options.