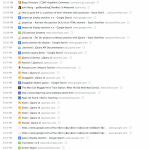 This is the result of a conversation I had with Gardner and Jon yesterday. Essentially, we all found this O-P-E-N page1 pretty interesting. As we got to talking it seemed that there could be some interesting ways that that movement could feed back into what the site itself in ways other than just changing the physical display of the elements. I knew that elements of that were possible in javascript. This site was what was in my head during the discussion- in particular the way the top speed numbers climb as you scroll down. What I wanted was slightly different. My idea what that by moving an element, or series of elements in particular ways a hidden message would appear- kind of like solving a puzzle (more easter egg style, less jigsaw). I did not know how to do this but was certain it could be done. This was my path. I knew how to make draggable objects from the refrigerator poetry days (That was back in August. See how strange things resurface?). I opted to redo it using the default example in JQuery because I’ve been using that for some other things. Now I just needed to figure out how to get the coordinates back in a way that I could display. My initial searches led me to position() […]