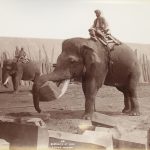 flickr photo shared by The National Archives UK with no copyright restriction (Flickr Commons) Suppose you wanted to automate a chunk of your CV creation. Suppose they’d let you do it digitally via Google Docs (if not aspects of this could still work but it wouldn’t be nearly as interesting) and that you’d like to link to the “proof” files. I am further supposing that you might be willing to think about doing this slightly differently. Usually people build the CV/tenure document and then go back and find/link to their evidence. The path I’m suggesting would allow you to gather the evidence as you came across it and then build the index to it automatically. You’ll still want to construct the overarching narrative but this takes the grunt work of listing/linking and puts it on the computer where it belongs.1 This is the proof of concept scenario. You could make it much better depending on your needs/wants but this ought to get you started with how it could work. This script does create a spreadsheet of all your content with a variety of useful links and creates a Google document with all the files as ordered list items under their respective folder headings.2 Given one folder called CV POC . . . in that folder are your three folders of […]