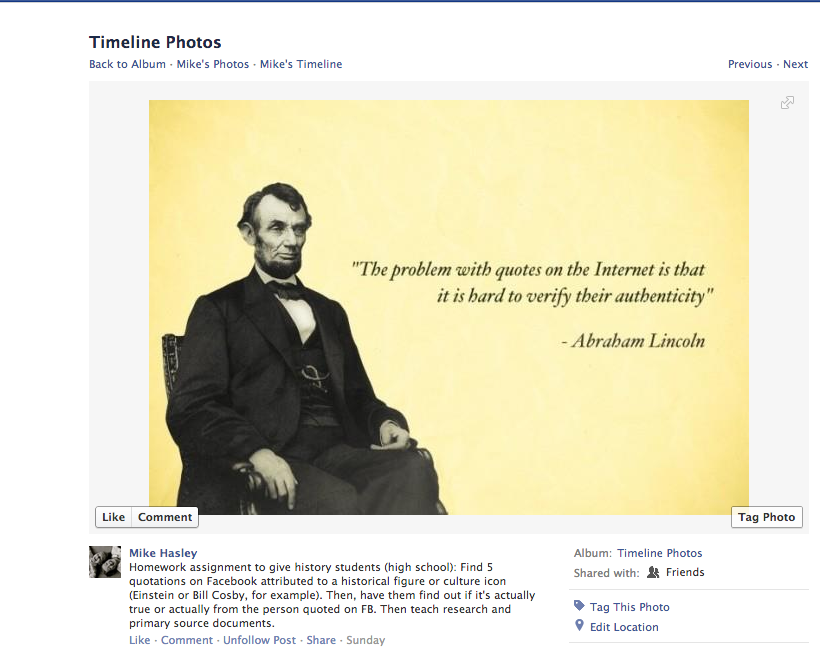 Mike Hasley, our Social Studies specialist posted the image/assignment above in FaceBook the other day.

Homework assignment to give history students (high school): Find 5 quotations on Facebook attributed to a historical figure or culture icon (Einstein or Bill Cosby, for example). Then, have them find out if it’s actually true or actually from the person quoted on FB. Then teach research and primary source documents.

That phrase seems to imply you can easily verify the truth of quotes not on the Internet…
The problem w quotes is that they’re often out of context, misattributed, mangled, or used to prop up shoddy arguments.

This has been bouncing around in my head since that post and started to solidify into something more expansive as I listened to the Radio Berkman podcast #193- Facts are Boring. This whole podcast is focused on truth, fact, and evidence. Given my historical interest in how gray1 “truth” is, the potential for greater understanding of the use/misuse/power of quotes in popular culture is very attractive.

I’d want to look at the historical use of quotes. Have things changed dramatically with the introduction of the Internet? This link, 10 Famous Quotes Everyone Gets Wrong, actually showed up in Facebook from an English teacher I used to work with immediately after Mike’s post. Mix it with this recent Boing Boing post on Occam’s razor, this Bill Cosby non-quote going around, the Berkman podcast, and you not only have a decent foundation for arguing people have always misused quotes but you also have a strong rationale for a diverse RSS feed and friends who don’t use Snopes on FB.

Brother Ockham, however, said nothing of the kind. Later philosophers have put these words into his mouth for their own convenience.

Here is what he wrote, according to the Stanford Encyclopedia of Philosophy:

“Nothing ought to be posited without a reason given, unless it is self-evident or known by experience or proved by the authority of Sacred Scripture.”

Given that a quote, by definition, is exactly what person said/wrote you get into some really fun stuff. I like Mike’s idea of having students gather some quotes but I want to expand on the analysis and broaden it to include both current day and longer term mistakes around quotes. I want to focus on why people use quotes at all and how then move into the ways people misuse them. What drives intentional misuse? What leads to accidental misuse?

You have some nice overlap with propaganda and persuasive elements as well as the evaluation of primary source documents. I might work in the idea of troll quotes into this with an emphasis on how knowledge of the audience allows the greatest degree of provocation. How does that knowledge inform your analysis of other misquotes?

Just seems like a lot of interesting potential on the English and cultural side with a decent opportunity to mix in history as well. It was also interesting to me just how many pieces of media from such differing sources came together in a fairly short period of time around this topic.

2 Frost’s The Road Not Taken is a decent example. Even if you argue about the meaning, it seems the way it’s used in every yearbook is not the intent. 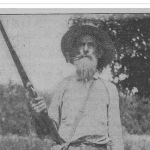 A Strange Aside – A Rejoinder About Crackers

I saw this interesting photo on the Smithsonian Libraries Tumblr which led me to this online archive of Forest & Stream from the 1890s. Where I found the letter included below (because of the interesting photograph beside it). Bonus points for the ability to download specific pages with or without the OCR data. The letter makes for an interesting read in a variety of ways. Just another example of how much amazing content is out there. A Rejoinder About Crackers While I do not wish nor intend to enter into controversy with “A Georgia Cracker” over the manner in which I described my first meeting with a “Florida Cracker,” still if you will kindly allow me a little of your valuable space in which to defend myself, I promise not to transgress again. Now, in the first place, if “A Georgia Cracker” will kindly look on page 507 of Forest and Stream, in the first column near tbe top, he will find these words: “There may be a better class of this part of the human race than we met. I hope there is.” I did not say that there was not a better class of these people. That I hoped there was. My assertion that we did not meet this better class, however, I still stand by. While I […]

Ian Bogost was on The Colbert Report last night. Bogost has a new book, Persuasive Games: The Expressive Power of Videogames, about rethinking the value of video games. From the book description: Videogames are both an expressive medium and a persuasive medium; they represent how real and imagined systems work, and they invite players to interact with those systems and form judgments about them. He mentioned a series of persuasive games he had produced to illustrate his theory, and as he described one of the games, I suddenly recognized it. Dissaffected, a game that places your on the service side of a Kinkos, must have popped on my radar last year. I played it for awhile, then became frustrated with the way I was being treated by the customers and never went back to it. I never realized the significance of my reaction. It is an interesting simulation of the service industry. Bogost has added a number of games to his catalogue, and I recommend exploring the games with your classrooms in mind. This could be a wonderful way to stimulate conversation and reflection. Ian Bogost’s Blog 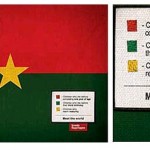