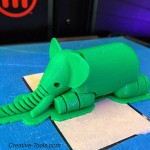 flickr photo shared by Creative Tools under a Creative Commons ( BY ) license We have a MakerBot Desktop 5th generation desktop printer. Because of some issues it was reset to factory conditions. That throws the firmware back to 1.0.something. When I tried to access it with the newest MakerBot Desktop (3.7) I could connect to the printer but all of the device options were greyed out so there was no way to update firmware (or do anything really). Instead of the name of the printer it showed the MAC address so it seemed the connection was good. I tried it on a PC running Windows 8 and on my Mac running 10.9. I power cycled the printer and the computers. I tried to connect via IP address but nothing worked. My next instinct was to try an older version of the MakerBot Desktop software. Incredibly, it seems that MakerBot doesn’t keep older versions of this software on their site.1 In the end I had to do a number of Google searches that removed makerbot.com from the search results. I went all the way back to the 3.1 version (get it here) and the connection worked perfectly. From there I updated the firmware. I then tried running 3.7 again but no dice. I uninstalled 3.7 and then went to try […]