An Open Letter to the ISTE Interim CEO and Board — re: Seymour Papert – Medium I am grateful to David for bringing attention to ISTE’s non-existent response to the life and death of Seymour Papert. It is worth noting that the father of our field, Dr. Papert, was never invited to keynote ISTE or NECC; not after the publication of his three seminal books, not after the invention of robotics construction kits for children, not after 1:1 computing was borne in his image in Australia, not after Maine provided laptops statewide, not when One Laptop Per Child changed the world. This lack of grace implies a rejection of the ideas Papert advocated and the educators who had to fight even harder to bring them to life against the tacit hostility of our premiere membership organization. Polar Bears’ Path to Decline Runs Through Alaskan Village – The New York Times “When you’re using it as a marketing tool and to bring in donations, there can be a tendency to lose the nuance in the message,” said Todd Atwood, a research wildlife biologist at the United States Geological Survey’s Alaska Science Center. “And with polar bears in particular, I think the nuances are important.”

Dynamicland Every scrap of paper has the capabilities of a full computer, while remaining a fully-functional scrap of paper. –this is augmented reality Education Outrage: In 1995 I posted the Student’s Bill of Rights. What has changed? 3. No student should be required to memorize anything that is likely to be will be forgotten in six months. Plain Sailing – Futility Closet By the time they matured, in the 19th century, they were no longer necessary. Historian Fernand Braudel wrote, “Colbert had thought of everything except the steamship.” — wonder how much planning ends up this way Complex Knitting and Critical Instructional Design: A Problem-Solving Mindset – OFFICE OF DIGITAL LEARNING We define critical instructional design as the intentional designing of digital learning spaces that reflect a sense of awareness, hope, and possibility; that encourage learning agency;  that allow students to own the process of their discoveries; and that likewise allow the creators of those spaces to undergo their own learning and discovery processes. As such, critical instructional design work asks for our perseverance as designers and learners, because the answers are often not at the surface but require some digging. 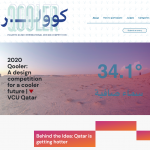