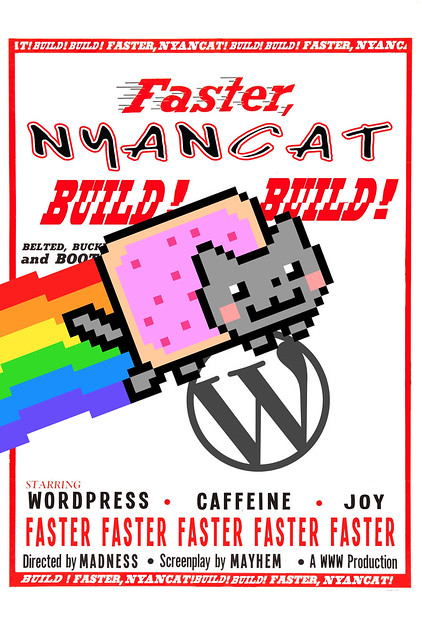 One of the more1 overlooked aspects of working with faculty around technology integration is speed- that is moving quickly from an idea/dream to working functional reality. Joy/playfulness is high on that list as well (and probably plays into speed) but I’ll focus on speed for the moment. It’s essential that working with a faculty development/ed tech group be the antithesis of the many monumentally lethargic interactions that characterize other institutional engagements. It ought to be agile. It has to be energizing.

From a from an interesting WIRED article h/t to Enoch.

I think that’s why WordPress has been so successful- it’s a flexible (but not overwhelming) platform that gets you 90% of the way to most destinations really quickly. It’s been interesting to see the possibilities around speed and flexibility keep moving. Talking to Tim Owens the other day about Sandstorm and the ability to spin up virtual just-about-everythings in the blink of an eye and maybe only for the moment. This is the opposite of the pattern of movement that has typically occurred in institutions.

To that end, I’m playing with this NMC session description that focuses on the things we’ve been using to get things done quickly.

A campy, meme-ified, high-speed exploration focused on building all kinds of interactive web content with (rather than for) faculty and doing it FAST. Ed tech on speed. Ed tech at speed. Turn ideas into functioning sites in an hour or less. We’ll go heavy on WordPress and explore flexible and reusable design patterns, magical plugins, and look at lots of example sites we’ve released into the wild. Beauty, power, data, and towering majesty are at your beck and call. FERPA questions will not be entertained.

I listened to Net@Nite today. They interviewed Jimmy Wales of Wikipedia and it was pretty interesting but had nothing to do with education. That did not stop me from applying some of these quotes directly to what we do. “This idea of- it’s not really about the software, it’s about the people. It’s about helping people find resolutions to problems and being supportive and loving and at the same time being firm with people who are trying to disrupt things. That’s really what it’s all about.” – Jimmy Wales “Ask anyone who’s every tried this. This is a very difficult balance to strike.”- Leo Laporte Leo’s preaching to the choir here. That line is very hard to walk and it sounds an awful lot like good classroom management- but with voluntary students. I always wondered would my students stay if they didn’t have to. Did I make their experience that good? Sometimes I did. I know I also failed at times and that’s where the next quote came in- “A long term project of learning, experimenting, you know trying things.” – Jimmy Wales To me that’s teaching. A long term project of learning, experimenting and trying things. If you aren’t changing and experimenting and learning right along with your students something is wrong. Several of my disaster lessons led to […]