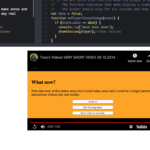 This was a quick demo built to show how we could mix videos hosted on YouTube with viewer choices at the end of those videos that cause other videos to load. There’s a bit of work around what the visuals would be like for a user but nothing aggressive.1 If you play the first video (around 5 seconds),2 you’ll get a prompt that partially obscures the video and then loads a new video based on the button you click. The people ended up going with Story Line or something like that but I liked this enough to write this post and figure it’ll come up again some day. With interest from someone, it’d be something that could be pretty easily built into WordPress as a plugin. See the Pen youtube end event by Tom (@twwoodward) on CodePen. 1 That means it’s ugly but I don’t want you to judge me. 2 Which is pretty short but I still fast forward it.