Home > Reflections > All Mobs Are Self-Selected

All Mobs Are Self-Selected All mobs are self selected 1 – 2Mobs bully/attack other people3 but they do so because people have gathered strength from finding other people thinking/feeling just like they do. I think the Internet and all the social media tools4 makes it really easy to surround yourself with the echo-chamber, or a self-selected mob, and then it becomes much easier to start doing dumb things while still feeling like your ideas/actions have been vetted and approved by an unbiased crowd.

I’ll also say that the Internet and social media allow you to do the opposite. That is you can surround yourself with vastly different ideas and people from very different backgrounds that will challenge your thoughts and ideas and help keep you from doing or continuing to believe stupid/wrong things.

I think far more people do the former. It’s human nature. I try to fight it in two ways. One, I try to get lots of ideas from outside what I do. I try to broaden where my information comes from and both the kind of information and the view points on information that I’m exposed to.. Two, I try to find people who make me just a little bit mad when I read them but mad in a way that makes me think. It’s easy to find people that make you mad but who you feel are idiots. That’s an echo chamber as well, just built of different stuff.

The way information flows on the Internet often results in people reacting quickly without thinking too deeply5. That reaction spreads quickly and can result in a lot of misguided action. I’d say that Twitter can certainly spread this kind of mob think because it’s designed for speed and the space restrictions result in complex messages being over-compressed which further encourages the polarization of the reaction.

1 and mobs often do very stupid things based on emotion

2 This post was inspired by some comments at the Edupunk panel at SXSW, which while disastrous as a whole, did have some good pieces. Granted, you had to look very, very hard.

5 There are lots of reasons for and examples of that 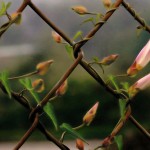 I was asked to speak about OER in K12 at the VMI STEM conference a few days ago. The speaker before me gave an accurate definition of OER and listed the normal places you’d expect – OpenCourseWare, MERLOT, Curriki etc. For what it’s worth, I listed those sites as well but when the places where I found digital content to be more interesting tended to be other places. It seems like the bridge that is far enough (but not too far) in K12 may be something that provides a central pillar of approved, vetted, standardized and permanentThink textbook refresh permanence. but that provides a access to fairly ephemeral, topical media elements. The image in my mind is something like the vine image below. cc licensed ( BY ) flickr photo shared by Randy Son Of Robert What becomes interesting is how you might do that. You could create a platform that allows those people with the time/interest in finding and sifting through things to populate content for those that don’t. It wouldn’t be hard using RSS. It seems like it’d be something like SuperPunch where someone who is passionate about a particular topic combs through different sites for things that are interesting. You could do state standard based aggregation but that’s likely to get messy and require an organization that […] 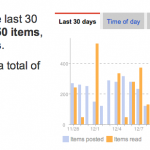 I’m purging my RSS feeds again. The last time I did it completely was 2008. It has been far too long.  Currently I’m sitting at 248 feeds and have been using Google Reader since 2007- roughly 6 years and 203,731 items read. That’s about 93 items a day, every day for 6 years. Clearly, I read most things from 6:00 PM until 11:00 PM.  Getting an iPhone has evened some of the reading time out some. And with that self indulgent surface level data done with, here’s some strange Internet ephemera. That is a terrifying glimpse into someone’s house built in 1724 that happens to be full of partially dismembered mannequins.  My wife found this one. Both of the clips above are just two recent examples of things continuing to move after people have died.  Package deliveries are pretty common (and hopefully positive) but the second endorsement by a man who passed away earlier in the week felt pretty unpleasant.   Sadly, I collect screenshots of odd wireless network names. I don’t know why edtech is fascinated with bananas but it is.  I took this shot at ISTE. This is from my hometown.  It’s pretty much sums up how things went in high school. Hawking. The world is strange. So if a teacher on a social network stumbles across something […]