The goal here was simply to take the Flickr API knowledge I’d gained earlier and apply it within a WordPress widget.

In doing so, I learned a few things. The primary one being that I often harm myself by being fairly good at making stuff work rather than understanding what I’m doing. That’s what I did here. The Flickr API thing was pretty legitimate. I knew what I was doing there but I pretty much crammed it into a widget plugin template without really understanding the whole thing. That led to more confusion around print <<

I did get it working but it doesn’t have any options or anything at the moment. I hamstrung myself by trying to skip a bunch of steps. I looked for a widget template and found this one. I should have gone to the WordPress codex widgets reference and made the thing from scratch but I was cutting corners and was impatient. In speeding up some things I hampered both my purpose (learn how to make widgets) and was stuck with some choices I didn’t quite understand.

In any case, round one is here (and commented up) and should function if you replace YOURAPIKEYHERE with your API key from Flickr. I plan to rewrite it from scratch and make it so you can enter your own API key, group ID, number of photos etc.

Migrating from WP to WPMU

I spent some time the other day helping our ITRTs figure out how to install WPMU and then get their single user WordPress blogs imported into WPMU. I’ll probably make a video sooner or later as this is probably murder without images. So here’s my shot at best practice advice in case you have to move a lot of blogs from WP to WPMU when you’re not the final end user and can’t screw up. 1. Go to your WPMU install and make a new blog. Make the url the same thing as your WP blog but add a 1 and the end (so if it the blog url is http://ego.com/loveme name this one loveme1). We’re doing this so you can import it in while leaving the original blog up until you’ve made sure everything worked the way you wanted. We’ll go over how to drop the 1 from the WPMU url later. The admin here will be whoever is the main user of the blog. You’ll have access no matter what as WPMU admin. 2. Got to your WP blog (the original one) and log in to the admin panel then choose tools>export. This will get all your content outIt doesn’t get your blogroll. If you want that do this.. Save it on your desktop or wherever in a […] 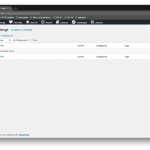