These two articles have no direct links to education but have some connections in my head.

It helps if you understand gavage and how people make foie gras right now.

“They’ll eat anything if they think that they’re wild. But that’s the key: they have to think, from the moment they’re born, that they’re just passing through, that they’re not part of this movie,”

“If you wanted to raise a baby Rambo, would you want him living rough out in the country or coddled in an intensive-care unit?”

Although Haney is intrigued by the idea of raising animals in conditions that replicate the wild, he’s not sure he can make the economics work. Natural nesting means that the birds lay only one set of eggs per year, and for a diversified farm where each animal has to earn its keep, that’s nowhere near enough eggs. Also, he prefers to be scientific in his experimentation, altering only one variable at a time. “Farms change in years,” he says. “Not months.” For now, Stone Barns’ geese will be hatched in incubators.

Seems like there’s a lot about our current educational system that resembles informational gavage. Students are clearly domesticated and the instinctive way they would fatten their heads in the wild seems to get turned off.

According to USC psychologist Wendy Wood, environmental change explains the difference and the lessons of the returning Vietnam solider are applicable to anyone who’s trying to change a bad habit. According to Wood, addiction treatment in the 1970s and 1980s focused largely on having people make changes to internal systems of goals and intentions. What the Vietnam vets got when they returned home after treatment however was a massive change to their everyday environment – and it was this complete transformation of daily life and routine that made it so much easier for the returning heroin addicts to remain abstinent.

Just thoughts on how staying in the same school, let alone the same classroom, for 30 years might impact attempts at changing practice. Not paralleling anything directly to heroin, just thinking how much school culture and daily patterns make it hard to make any serious pedagogical change. 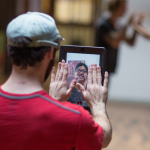 I freely admit to having mocked iPad robots on more than one occasion. My experience with them has largely been awkward encounters at conferences where they felt more like curiositiesStep right up folks! See a two-headed calf! than anything with real purpose or impact.It could also be that I’m extra-cynical at conferences. But . . . we recently ended up in a scenario where a student in Molly’s Artfulness class was going to be unable to attend class for a lengthy period of time. She was considering dropping the class. The next class was a dance-focused class run by Jill Ware where movement and being in the space was particularly important. All this came out in an informal conversation with Molly. As a semi-joke, I said now was the time to use the iPad robot . . . and not only did we do it but it ended up working really well. You can see some of the interactions playing out below. I think it was a fundamentally different experience than merely watching. In this particular scenario I think that the iPad robot really made a remarkable difference in terms of interaction on the part of the student driving and the students interacting with the robot/student.Cyborg is the wrong word but it was far more effective blend of machine and […]

Little Boxes All The Same