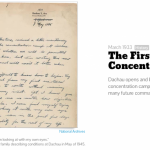 I read Maus I and II and opted to make a timeline. Maus is a graphic novel completed in 1991 by American cartoonist Art Spiegelman. It depicts Spiegelman interviewing his father about his experiences as a Polish Jew and Holocaust survivor. The book uses postmodern techniques—most strikingly in its depiction of races of humans as different kinds of animals, with Jews as mice, Germans as cats and non-Jewish Poles as pigs. Maus has been described as memoir, biography, history, fiction, autobiography, or a mix of genres. In 1992 it became the first graphic novel to win a Pulitzer Prize. Wikipedia It’s a good text to explore via a timeline because of the the non-linear storyline and the advantages of setting additional historical context. As a result of this, I’ve spent some time trolling the National Archives. Normally I wander around the Library of Congress but I was doing a parallel reading of The Liberator1 by Alex Kershaw which had some great images from the National Archives so I was inspired to go check it out. There is a lot of great content available digitally, including some stuff I hadn’t seen before. Search and features leave something to be desired and you have to be really specific with your search terms. One other thing to be aware of is that deep […]