Home > Teachers, can you spare a dime?

Teachers, can you spare a dime? 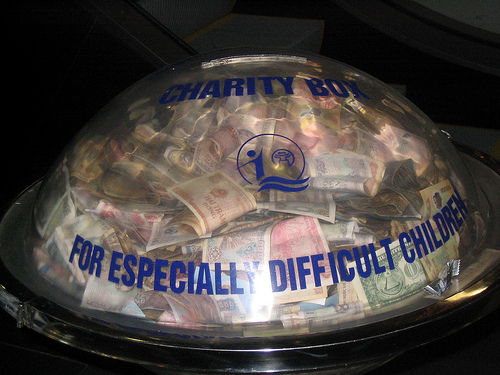 Let’s all get behind this worthy charity that will clearly benefit all educators…
Happy Friday, Y’all!

Since Milobo tagged me and I follow the rules of tag like a religion here are 7 things about me. As a general rule I don’t like schools or organized US education I probably don’t like other the systems in other countries either but I haven’t met them yet.. I often wonder how I ended up doing this or if I even really belong here. On a positive note, I did enjoy Montessori school when I was younger. I have had 9 different full time jobs since I graduated in 2000. I’ve been hired by HCPS three separate times now and the University of Richmond twice. I’ve lived in Alabama, Georgia, Texas, South Carolina, South Korea, New York and Virginia. If it wasn’t for my extended family I’d move to Australia even though I’ve never been there. I like Steve Irwin that much. I used to chase rabbits a lot in my neighborhood- barefoot Me . . . that is, I’m barefoot and the rabbit is as well, I guess. I caught one once. Once. I hate that I have to sleep but like sleeping. I can’t help but think of how much more stuff I could do if I could just get by on 3 or 4 hours of sleep a night. As a result I’m always looking for […]