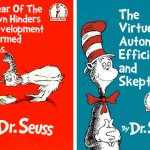 Americans Have Never Loved Poetry More—But They Call It Rap – The Daily Beast “To utterly naïve anthropologists sent to document the ways of Americans in 2014, one of the first things that would strike them is that this country is quite poetry mad. No, they would not find well-thumbed volumes of Robert Frost, Marianne Moore, and Billy Collins laying around the typical living room. However, they could not help but notice that a great many people under about 50 regularly go around listening to and yes, reciting poetry—rap, that is. Rap is indeed “real” poetry. It rhymes, often even internally. Its authors work hard on the lyrics. The subject matter is certainly artistically heightened, occasioning long-standing debates over whether the depictions of violence and misogyny in some of it are sincere. And then, that “gangsta” style is just one, and less dominant than it once was. Rap, considered as a literature rather than its top-selling hits, addresses a wide-range of topics, even including science fiction. Rap is now decades old, having evolved over time and being increasingly curated by experts. In what sense is this not a “real” anything?” tags: rap english weekly poetry “Stochastic Tinkering” | Center for Strategic and International Studies “”[Black Swan Author Nassim] Taleb, an anti-Platonist, believes that universities are better at public relations and […]